The Dunes of Holkham

When most visitors think of Holkham they think of its unspoilt beach and stunning sand dunes. The sand dunes are a key feature of the area and this has led to many people asking me, how they were formed.

There are approximately 11,897 ha of sand dunes in England with 1,200 ha here in Norfolk.
Dune grassland and dune slacks support a wide variety of plants and are rich in invertebrates. The dune system at Holkham is protected by a number of conservation designations, such as SSSI and SAC. This is the reason why horses and bikes are not allowed access through the dunes. 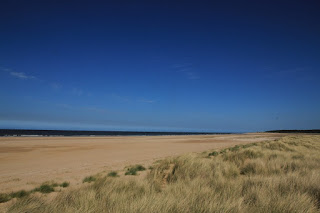 Along with the beach, the dunes are one of Holkham's
most famous features.

The sand dunes at Holkham were formed because there is a large beach plain, so plenty of sand. The surface dries out between high tides, and then dry sand is blown landwards by strong onshore winds and deposited along a shingle ridge above the high water mark. At Holkham the dunes are unusual as they are rather alkaline due to the amount of shells in the area.

Embryo Dunes are the first stage. There is very little vegetation and sand is only just starting to accumulate. 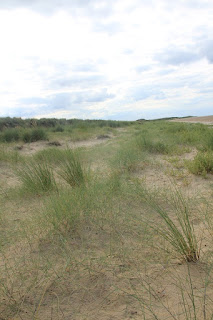 Foredunes are part of the sand dune system on the side nearest to the sea. They are comprised of wind blown sand and scattered plants, such as sand couch-grass and sea rocket. As embryo dunes build up, the surface is raised so as to be out of reach of all but the highest tides. 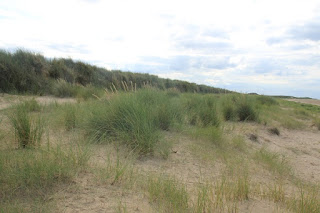 Yellow dunes are yellow in colour because of a lack of soil. They are dominated by marram grass. Marram grass is tall, robust, flexible in the wind and very effective at trapping sand. Their binding rhizomes help stabilise the sand dunes and enable other species to grow, such as sea sandwort. The dunes grow to around 5m. 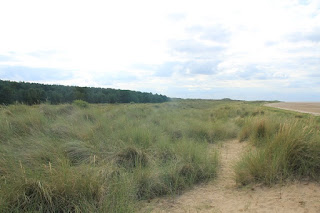 Vegetation has become varied and dense.

Grey dunes are grey in colour because of the presence of soil. As dead leaves from the marram grass breaks down so plant nutrients are released into the soil improving the conditions for plant growth. Due to an increasing distance from the sea vegetation diversity increases, though the plants are still highly specialised. Marram grass is still abundant but other species are able to colonise the area, such as red fescue and bird’s foot trefoil. Grey dunes grow to between 8 – 10 m high. 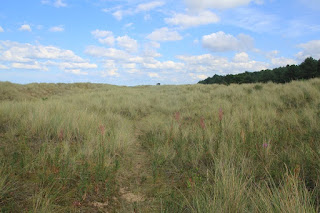 Core samples have shown that the Holkham dunes are
200 years old!

Dune Slacks occur when the surface of the sand dune is eroded down to the water table and wet sand is exposed. A secondary dune slack can have the appearance of a bomb crater! Dune slacks can be extremely species rich. As well as rare orchid species there are a number of uncommon species of butterfly, dragonfly and the very rare vulnerable natterjack toad. 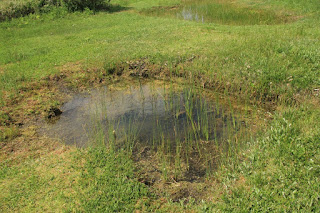 Through careful sympathetic management the warden team aim to ensure that there is a succession of dune slacks at different stages of re-colonisation, thereby providing a habitat for rare flora and fauna, to control the invasion of non-native species and to protect the sand dunes from erosion by recreational use.

When you next walk along the dunes at Holkham National Nature Reserve why not try and identify these stages. The coast is always changing so there is always something to see!