August seems to have been the month of change, and I don’t just mean the weather. Change is definitely in the air as small flocks of birds begin to migrate.

Autumn’s passage waders are a little stop start at the moment with 100+ Curlew, 5 Greenshank, 6 Green Sandpipers, 1 Common Sandpiper, and 7 Wood Sandpipers gathering on the pools at Holkham. Yesterday there were signs of Spotted Redshank with their silvery grey and white winter plumage, Ruff and a Jack Snipe near Washington Hide. 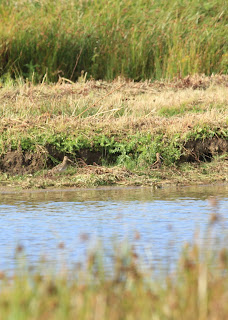 Can you spot these camouflaged
Snipe at Washington Hide?

It’s also been a good time for passage migrants. These birds pass through the British Isles in autumn on their way south to Africa having spent the summer in northern Europe. There have been several sightings of warblers including a good showing of an Icterine Warbler. Many people had excellent views of this traditionally shy bird however, that cannot be said of a young Barred Warbler, which stayed well hidden in the dunes. The numbers of other warblers arriving are also slowly increasing such as Blackcap, and Whitethroats. Common migrants have also been arriving in good number. Wheatears and Redstarts have joined the growing number of Whinchats. Even a Red-backed Shrike was seen dropping into the sloe bushes on the Holkham-to-Wells Backtrack. 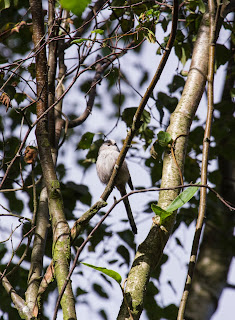 Look out for migratory tit folks as they may
shelter rare birds including Yellow Browed Warbler.

A Great White Egret is well into its 2nd week on the reserve and has settled on the scrape nearest Decoy Wood. Although it is only appearing now and then, with a lot of patience and a bit of luck you can get a good view as it stalks the shallow waters of the dykes along the grazing marsh. 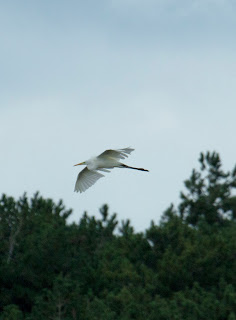 A rather raggedy Great White Egret.

Despite the recent rain, birds of prey have been showing regularly including Marsh Harriers, Kestrels, Sparrow Hawks and Common Buzzards (2 in stunning pale plumage) and an often-seen Peregrine Falcon (outside Jordan Hide). In the last few days a Short Eared Owl has also been sighted dropping into the dunes at Burnham Overy.

In contrast, sea-bird sightings on the reserve have been very poor with only a small group of Gannets seen passing far out to sea. However, the bad weather did sweep in an unlikely Little Gull into the Overy dunes/Gun Hill area of the reserve. 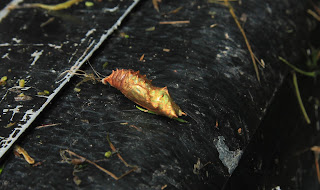 Keep an eye out for late butterfly's and their chrysalis
like this beautiful gold Small Tortoiseshell chrysalis.

The rain flatted much of the tall grass, and as a result conditions were great for mammal watching. Common and Short-tailed Shrews could be seen moving thorough the grassy verges  (and often being eaten by Herons!)

With the start of September we can look forward to many more migrants arriving and passing through Holkham NNR. With north winds we should see the arrival of the first flocks of Fieldfares and Pink-footed Geese!
Newer Post Older Post Home