Firstly, I must apologise for no updates recently. We have been unbelievably busy on the reserve and I must admit to a few days holiday.

On site there has been a good selection of waders spread right across the marshes with up to 100 Black Tailed Godwit, 24 Avocet, 4 Spotted Redshank, 5 Greenshank, 17 Redshank as well as Curlew, Oystercatchers and a good number of Ruff. The males are looking rather attractive with their wide variety of different plumage due to their various stages of moult. In the evenings it is always worth looking upwards particularly at high tide as we have had almost 100 Common Scoters fly past!  And, the odd Whimbrel has been seen passing over the reserve flying west. 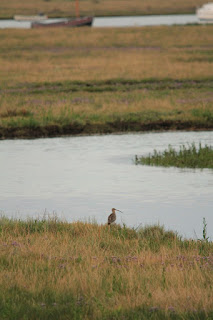 A lonely Curlew surveys its watery
territory during high tide at Norton.

Other notable birds include plenty of Little Egrets that can still be seen hunting in the shallow dykes. A Green Woodpecker family has been very noisy in the pine woods at Holkham NNR and a lucky Quail that survived the guns of Malta was heard (but not seen) by myself and others at Whincover.

There have been excellent sightings of Marsh Harriers from both hides. As you approach the reserve you can get some stunning views of the harriers with newly independent youngsters hunting in the fields near the coast road giving some good photo opportunities. There has been plenty of Red Kite activity and the odd Buzzard too but no more sightings of the Short eared or Little owl. Barn Owls have been showing very well especially near Washington Hide. Early evening is the best time to see them but remember the reserve gates are being locked at 9:00pm very evening until October. 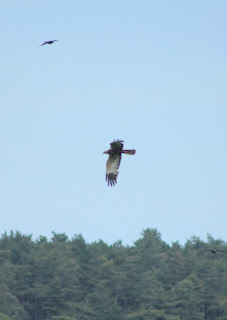 Unlike their Hen Harrier cousins the Marsh
Harrier is slowly recovering from near
extinction in Britain but they remain rarer
than Golden Eagle.

I enjoyed a very interesting evening while walking through the reserve last week. I saw 16 Brown Hares grazing and chasing each other in the fields (they have a long extended breeding season, so are still quite frisky) then, some lovely Roe Deer on the old railway line but the evening was to get even better when, walking through the Natterjack ponds I noticed a young Hedgehog sat right in front of me. It decided it was quite comfy where it was and sat there until I had to go home. 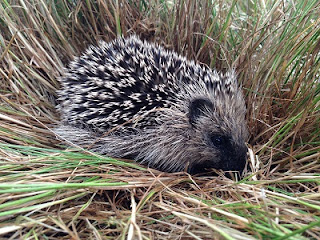 Due to the mostly nocturnal nature of Hedgehogs it is
difficult to assess their numbers on the reserve.

There were a lot more butterflies at the start of the month when the weather was warm and sunny such as Grayling, Essex Skipper and  White Admiral, dragonflies included Emperor and Southern Hawker as well one of my personal favourites, the Hummingbird Hawk Moth. However, despite the recent cool wet weather there are still several species still active, such as Forester Moth, Gate Keepers Butterfly and Ruddy Darters. 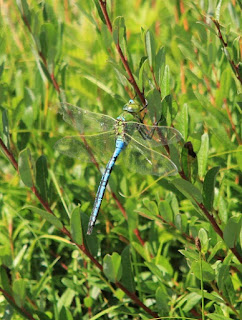 The Emperor is one of the UKs largest
Dragonfly's it is brightly coloured and
rarely lands even eating its prey on the wing.