A Life on Ragwort

Common Ragwort (also known as Stinking Willie) is a native biennial plant which often grows naturally on uncultivated land. The problem with Common Ragwort is, it is toxic  and if left unchecked can seed through large areas. Ragwort is poisonous to livestock especially horses but fortunately most mammals are aware of its toxicity and avoid eating the plant. Ragwort is very distinctive with finely divided deep cut toothed leaves and large flat-topped clusters of yellow daisy-like flowers. It flowers from July to October and is a good late nectar source for hungry insects.

Despite its hazards many species depend on Ragwort and live their entire life cycle on the plant. Therefore, Holkham National Nature Reserve takes a balanced approach. Ragwort does need controlling but not eradicating and we take all reasonable action to do this on the nature reserve. We manage the spread of Ragwort on the grazing marsh by grazing cattle but as a natural dune flora Ragwort is left unmanaged on the dune system. 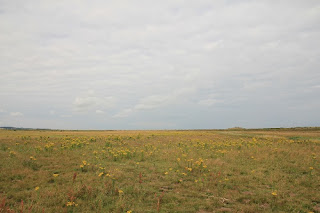 Ragwort will quickly take over a field if it isn't controlled.

Cinnabar Moth Caterpillar
Ragwort (mainly common ragwort) is the sole food plant for the golden and black banded caterpillar of the Cinnabar moth. The caterpillars feed from July to September and act as a biological control by eating the whole plant. The poison from the ragwort leaves is stored in the caterpillar's body. The bold colours and patterns are a warning to birds and other predators that they are extremely unpleasant to eat. 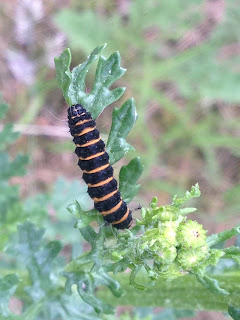 These caterpillars are both eye
catching and alarming at the
same time!

Bumblebees
Bumblebees are a familiar sight during hot summer days with their characteristic behaviour and distinctive buzzing sound. Sadly, bumblebees are in massive decline due to the reduction and removal of hay meadows and hedgerows from the British landscape. Ragwort flowers are an important source of food for many bees. These include the obvious Red-tail Bumblebee, the bird box dwelling Tree Bumblebees and the distinctively ginger Common Carder Bee. 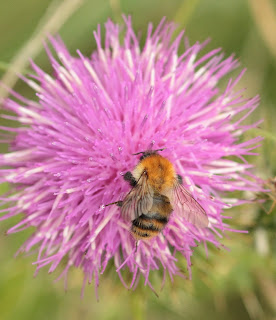 A Common Carder Bumblebee
(unfortunately not on a Ragwort flower!).

Forester Moth
This exquisitely coloured metallic-green and remarkably well camouflaged moth is a UKBAP species. It is thought to of been named after the "Lincoln Green" worn by the foresters in Sherwood Forest. The species is in decline but can be found locally in the coastal marshes and around damp meadows. We found this fellow while ragwort pulling on the Fort. It just goes to show the diversity of species that can be found on ragwort. 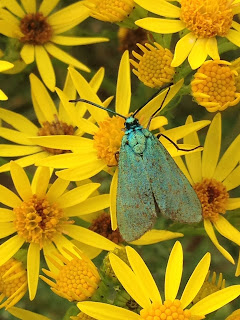 
Possibly the most unluckily named insect out there, it is also known as the Maybug though it's not a bug, these large beetles actually belong to the scarab family. The harmless beetle is a distinctive brown colour with characteristic fan like antennae. Cockchafers spend most of their lives (three to four years) underground as larvae. The larvae (which are called Rook Worms) are fat, creamy-white grubs with brown heads that feed on the root systems of ragwort. In turn these grubs are fed upon by badgers, owls and bats! 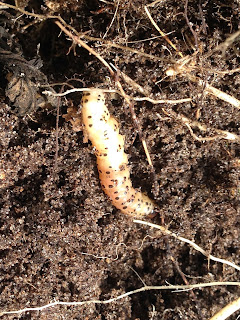 Both adults and grubs are considered
a delicacy and are still eaten in some
countries.