One of our traditional tasks at this time of year is the management of several of our grassland areas. This involves cutting, either with strimmers or in some of the larger areas with tractor and then raking up all cut material by hand. Cutting prevents areas turning to scrub and by removing the cuttings it prevents unwanted nutrients building up and enriching the soil. The resulting shorter swards of grass are then good for an assortment of wild flowers which otherwise would find it impossible to compete or survive within too much shade or with other more vigorously growing species. 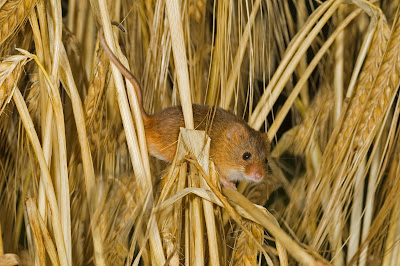 By working in such environments by hand it gives an opportunity to see close up some of the inhabitants that are normally hidden away from view. Admittedly in the autumn when we are doing such work there is less to be seen as most invertebrates are coming to the end of their short lives and most plants have long since finished flowering but there are always plenty of clues as to what has been and what is to come! One such example of a species we seldom see is the Harvest Mouse. Whilst these rather cute tiny golden orange rodents with their long prehensile tails are still reasonably common in the UK south of Yorkshire and east of Wales, they can be difficult to find, let alone observe. Declines have been suggested due to intensive mechanised arable farming yet the true population size is really unknown. Harvest Mice prefer rank grassland and here on the coast, dry reedbeds. They can also be found along old hedgerows, in fallow fields and less intensively managed farmland. 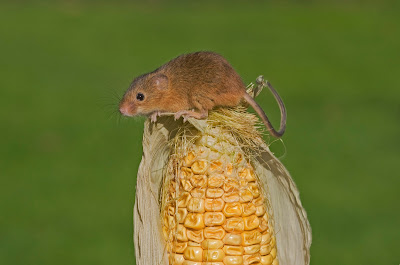 Weighing as little as four grams, the Harvest Mouse is Europe's smallest rodent

As they are Europe’s smallest rodent they can be virtually impossible to find. Often the only clue as to their whereabouts is the sight of a distinctive nest. This is a golf ball sized bundle of tightly woven grass and every time we work in such places we always find one or two Harvest Mice nests, suggesting they are actually quite widespread across the reserve. One constant surprise is that every time we have a tidal surge we find dead Harvest Mice. This really does suggest that there is a far larger population out in the rank saltmarsh grasses than is generally recognised and that they can adapt and live in conditions out of their more normal accepted habitat.

Harvest Mice nests have a dual purpose. Summer maternal nests are said to be solely for that reason; producing offspring and are then abandoned. Winter roosts are said to be in different purpose made nests, with the remnants of food, such as discarded seed husks being a sign of recent occupancy. So to see an actual Harvest Mouse requires an awful amount of luck. Some people live a life time and never get a glimpse of a wild, live one. Everyone recognises one from a book as they are so distinctive and being so brightly coloured surely they should be easy to see? No, not the case as they live close to the ground keeping well out of the way of all manner of predators. They do venture up reeds and grass stems quite freely due to their long hairless and prehensile tail. It really does act like a fifth limb. 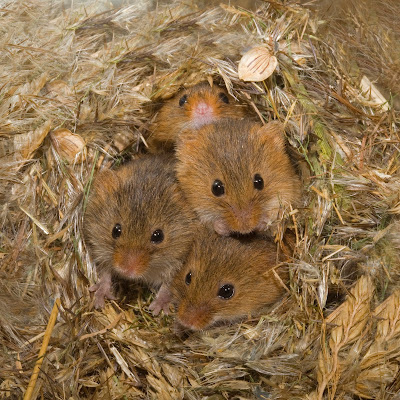 A sight that very few people have seen in the wild; a nest of young Harvest Mice

My own sightings seemed a long time coming but in recent years working on the reserve I have been fortunate in seeing them from time to time. Even then to see a wild one cling onto a grass stem is an incredibly lucky experience. I have seen it only once and that came as a matter of sheer good luck. I was walking through the dunes close to the foreshore and heard a series of short rasping squeaks. I always try and check out such noises as you can never be sure what you will see and on this occasion I hit gold. Literally! Three dark golden mice scattered on the marram tops in front of me. They were youngsters, probably only just weaned from their nest, their skinny tails enabling them to cling precariously to the grass stems. I never saw the adults, they were probably well hidden, but these fearless youngsters gave me my first and only real close up experience of wild Harvest Mice doing what everyone wants to see a Harvest Mouse do. Other than that my only other glimpses have been whilst working. Occasionally I have flushed a golden shape as it scampers out from some reed litter whilst reed cutting never to be seen again. More regular observations have come when topping the marshes by tractor. Kestrels are never far from the scene and sometimes amidst the more typical Field Vole prey items they dive down and snatch up the odd Harvest Mouse too. Sightings such as this combined with nests we find are certainly enough for us to know we have a widespread population on the reserve although at what sort of densities we do not.