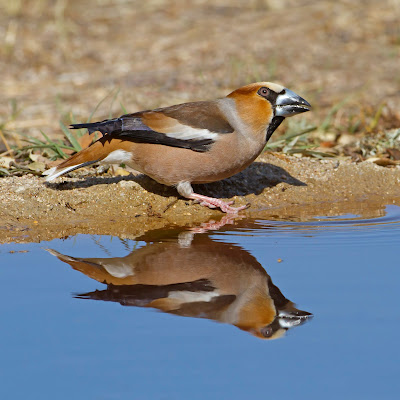 With its subtle mix of colours and enormous bill, the Hawfinch is unmistakable

Despite being a cold and unsettled period of the year with shorter daytime hours the winter can provide the avid naturalist with much to enthuse. Ordinarily, vast flocks of geese and wildfowl provide an over awing spectacle on the grazing marshes of the reserve yet at present our numbers seem well down on past years, a reflection of the mild autumn and early winter. There is however plenty of other sights to keep the enthusiasm levels up. One very elusive species in particular, the Hawfinch, is worthy of note at Holkham and I have been lucky enough to encounter it whilst doing routine work out and about on the reserve.

The Hawfinch is the UK’s largest finch and it is instantly recognisable due to its large conical beak. This is an amazing adaption that allows it to crush the seeds of beech, hornbeam, yew and even cherry stones. Special muscles surround its skull that enables it to use extreme pressure when crushing these very hard seeds. It has been estimated that it is capable of exerting the equivalent of 68 kg of pressure per square inch with its bill! Even its scientific name Coccothraustes coccothraustes, means ‘one who can break open kernels’. Not only is it a front heavy looking bird but it is a subtle yet pleasing mixture of orange (on its head), varying browns and greys and very odd looking shaped wing feathers. Small iridescent blue/black triangles form on the feather tips which are splayed out during the male’s intricate display ‘dance’. All in all it is a subtle yet quite exotic looking bird. What makes the Hawfinch even more special is that is usually incredibly elusive. Despite its size and looks it feeds unobtrusively either in the canopy of trees or on the ground. It always remains ever alert and fit to disappear at the slightest disturbance. Such behaviour makes any sighting all the more fortunate. 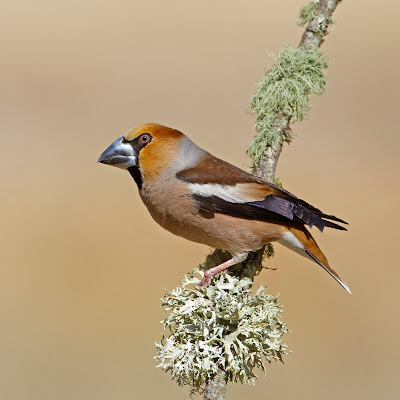 Holkham has quite a long history with Hawfinches. When I was growing up on the Estate in the late 1970s and early 1980s the trees just inside the main gates were the best place in Norfolk for seeing them. Here they fed in the winter on fallen hornbeam seeds before moving around the Park in the spring ready to nest. Open parkland or large country gardens with a mix of deciduous trees (including plenty of beech and cherry) make the ideal habitat and in the past the grounds of both the Hall itself and the Walled Garden were nesting sites. Like so many of our song birds, a decline has been noted all across the UK and it is now a very scarce bird. Up to 75% of the breeding population has gone within a 40 year period. Declines have been blamed in part to dropping insect numbers (caterpillars are the main food of the young) and also the vulnerability of their frail open nest sites to predators such as Grey Squirrels and bird such as Jays and Magpies. 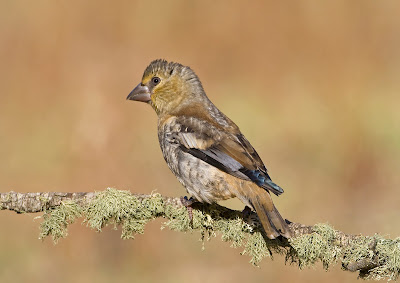 A freshly fledged juvenile; not a sight often seen.

At Holkham my past is littered with great Hawfinch moments. My old departed Uncle who was gardener at Quarles Farm after the Second World War told me with great sadness how he had found a freshly dead one on the lawn close to the vegetable patch. He suspected it had been after his prize peas (another known food source from when they were more numerous) and been attacked by a Sparrowhawk as it was departing. I was once very fortunate in witnessing a male display to a female prior to copulation. This involved a spectacular courtship ritual/dance with head held skywards, wings stretched out as he wandered around dipping and bowing in front of his mate. It was one of those once in a life time moments that I had read about in a book, yet never expected to see. I suppose however the ultimate find was discovering a nest, complete with two fledglings in the cleft of a Holm Oak tree close to the Walled Garden. The next day they had fledged and were sitting on a branch awaiting their parents with food. Sadly since the new millennium Hawfinches have all but disappeared from Holkham Park until recent times. 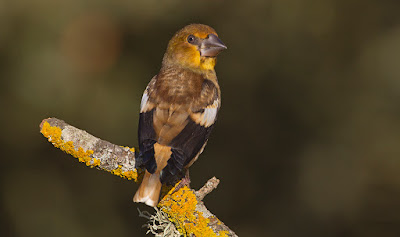 Juveniles have a more yellow look to their faces

This autumn we were working in the Dell within Wells Pinewoods, raking up grass we had cut when a familiar explosive almost metallic ticking call cut through the air. It was a Hawfinch and it flew right over our heads, its white wing bars illuminating its striking bounding flight. A moment to cherish but one that was not in isolation as this autumn saw a tremendous influx into England of migrant Hawfinches from the Continent. Flocks and odd ones and twos were reported far and wide as a result some have said of poor food availability in Eastern Europe and storms over Europe that pushed the wandering finches our way. It is hoped that such an invasion will allow our native breeding population to re-establish itself and perhaps we might even see this elusive bird start to nest again within the grounds of the Estate. We certainly have currently got a regular pair back in their old haunts just inside the main gates, feeding under the same hornbeams and in the same yew tree that I saw my first ever ones in over 35 years ago.