As October turned to November this year all thoughts should really have been aimed at the dawn of winter. With the temperatures continuing to be mild (only one frost logged by mid-November) and little rainfall it really did seem like the autumn was carrying on with no end in sight. I’m sure that won’t be the case for much longer, but in the meantime we can reflect on some of the rather more unseasonal sights that have continued to be seen on the reserve. As I write this (on November 29th) there is quite miraculously still a Swallow hawking for the last remaining insects around the beach car park at Wells. 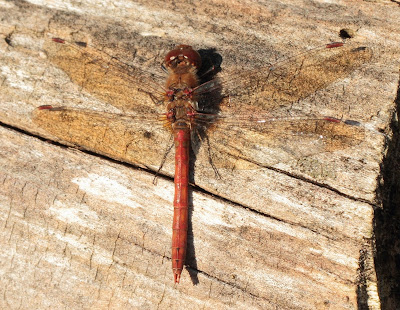 A male Common Darter soaking up some late autumn sunshine

First and foremost of unseasonal sights has been the continual appearance of Common Darter dragonflies (at least up until mid-month). On sunny calm days it has not been unusual to see the distinctive elongated shape of these winged insects flying back and forth over sheltered spots within the more open southern edge of the pinewoods. Their movements can be erratic, fast and dashing one moment, slow and hovering the next before pausing to alight on exposed logs or branches that are facing into the full sun. Little wonder they are known as darters. They are certainly always darting from place to place constantly looking for a spot to bask in as if soaking up every bit of the late autumn sunshine. One last sun bathing session before their ultimate demise! Whilst not sitting in the sun they are always busy looking for smaller insects to feed upon. This is why most insects are no longer on view in the winter, too cold and little in the way of food. Dragonflies of course live a longer life as an aquatic ‘nymph’. Eggs are laid by the adults either on waterside vegetation or in the water from which the larvae (the nymph) emerges and after roughly a year, for the Common Darter,  it will metamorphasize into the adult dragonfly we have still been seeing of late. 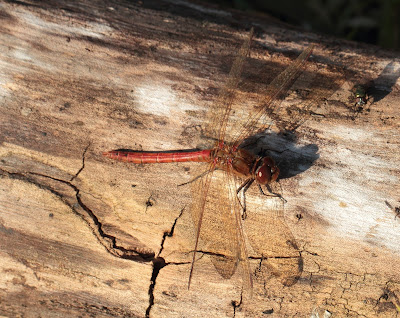 I always think Common Darters blend in quite nicely to the autumn scene, the vivid orangey red of the males being a similar tone to the hips and haws that they frequently perch beside, whilst the drabber females harmonise perfectly into the background of leafless bark and trunks. This is in contrast to when they first emerge in August, then they are more of a dull yellow. One of my nicest memories of this autumn was whilst strimming the glades alongside the track near Meales House and counting 13 Common Darters all lined up together on a single log and all facing in the same direction. It really looked like they had been stuck there, until a marauding wasp came flying along. It purposefully homed in on a single darter, trying desperately to grab it on the back of the head. Several attempts were made, yet each time the lightning fast reactions of the darter allowed it to escape. 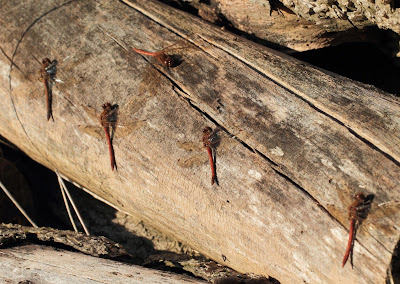 Five of an eventual total of 13 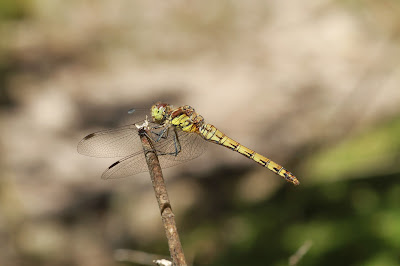 This female was photographed in August, its yellow colouration fresh and pristine

At the end of October we also enjoyed seeing a selection of late butterflies. Some species will have third broods of adults if nice weather prevails into the autumn and that is exactly what happened this year. Wall Browns, Brown Argus, Common Blues and Small Coppers were all seen at the month’s end on the dunes in very fresh condition, a sure sign that they had not long emerged. For the Wall Brown this was most encouraging as it is a fast declining species in much of its UK range. It prefers short cropped grass in places such as cliffs and sand dunes where it lays its eggs on grasses. Here at Holkham it has always been a regular sight, yet numbers did start to drop about ten years ago. We still see enough to know that it is holding its own, yet numbers are never as great as they once were. Most sightings come in late April/May and again in August but late October records are every few and far between. Being a chequered orange and black it is quite an easy species to see, particularly when it basks in the sun on stony outcrops or walls, which is where it got its name from ! 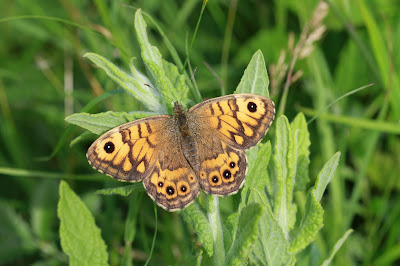