Flight of the Fish Hawk 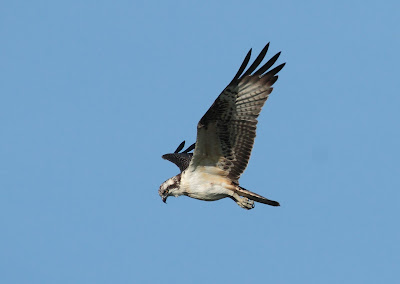 The Osprey, one of the UK's most spectacular birds

Without a doubt one of the most spectacular sights of nature within the British Isles is that of an Osprey plunging down into a lake to catch a fish. With a wingspan close on five and a half feet the bird is an impressive enough sight alone, yet when it splashes into the water head and feet first after a spiralling plummet from great height, the spray of water and audible crash leaves a lasting over-awing impression of natural power and precision diving. Within the regularly seen range of British birds of prey the Osprey is one of the biggest with only the eagles larger and it has evolved with unique adaptions for its fish catching habits. It has incredibly long curved talons of which the outer ones are reversible, it has backwards facing scales on its feet that act like barbs when clinging onto a fish while it nostrils are able to close when it dives underwater. 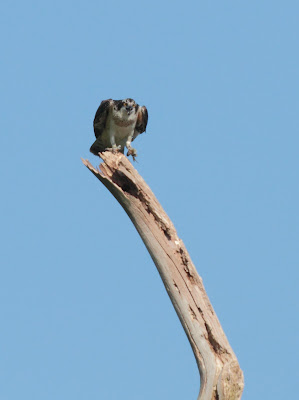 Not only is the Osprey a spectacular looking bird but it is also quite a rarity. Once widespread over much of Britain it was persecuted to such an extent in Victorian times that it was feared to be nationally extinct by 1916. A slow process of re-colonization begun in the 1950s in Scotland and thanks to greater protection initiatives the species had increased to close on 300 pairs by 2011. Re-introduction in the Midlands around Rutland Water has also helped the species move south into suitable habitat away from the lochs and rivers of Scotland, its traditional homeland. Our UK Ospreys are migrant birds, heading south into Africa to spend the winter after a breeding season in the north. And this is where Norfolk and Holkham come into the story. Despite still being a rare sight within Norfolk they are still regular enough to be recognised as a passing migrant both in Spring and Autumn. Occasionally birds might make longer stays at places such as the Norfolk Broads, the West Norfolk fishing lakes and even Holkham Lake. 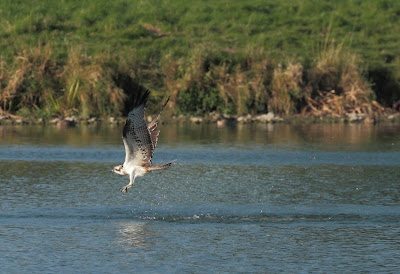 At Holkham we eagerly anticipate the appearance of one or two each year but usually they are just passing through. Blink and you miss them! You always know when an Osprey is about due to the sense of sheer panic shown by other birds on the ground. Here on the coast flocks of gulls and ducks along the marshes erupt en masse when the long winged shape of an Osprey drifts overhead. Migrating Ospreys actually look a bit like large gulls, due to their white underparts and lazy bowed winged profile even though they can sometimes pass at great height. Holkham’s marshes and lake has however through the years managed to attract a few lingering birds all that have left a lasting impression with those lucky enough to have seen them. 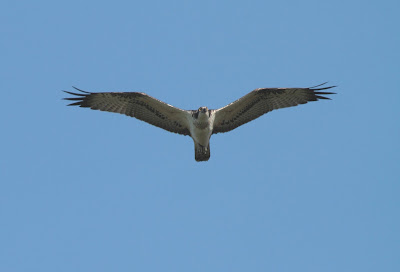 My first view of this year's Osprey, overhead from the tractor window!

One such bird arrived this September. I had heard several reports of one flying over the marsh causing its usual sense of panic but always managed to be in the wrong place to see it, yet that soon came to end one day when I was out topping in the tractor. Geese, gulls and ducks flying in every direction, the local Marsh Harriers and kites all flying up to investigate and there amongst this melee of wings was an Osprey! It circled the marsh even dropping low over where I was working before heading off towards Holkham Park and the lake. We later heard from one of the keepers that it had been visiting periodically, fish the undoubted attraction. As the weeks progressed so it turned out that the bird settled down into a little routine – flight out and around the nature reserve before returning to fish on the lake. Here it would sit up on the tallest trees seemingly admiring its surrounding before periodically sailing around the length of the lake, hovering with great ponderous wing beats and crashing into the water. This particular bird was a juvenile perhaps from a Scottish or even Scandinavian nest pausing on its southbound migration, its immaturity perhaps explaining why its fishing forays were not always successful. About one in four attempts usually resulted in a catch. 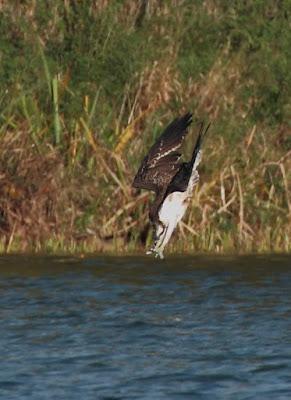 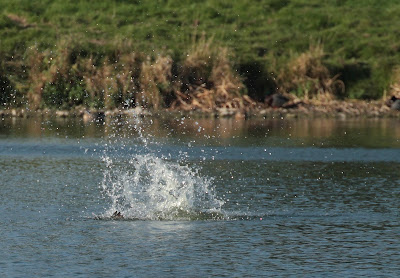 Splashdown! Only the bird's wings tips can be seen amidst the spray of crashing water

Like many other keen naturalists I spent my time off encamped along the lake’s shore waiting for that magical moment when amidst a crescendo of wings and water I hoped to see the Osprey emerge with a fish. Holkham Lake’s association with Ospreys goes back further than this year’s social media celebrity. One of my own most cherished sightings is of a similar young autumn visiting Osprey in the 1990s. It caught a fish so large on the west shore that it had to swim/clamour its way through the shallows. I was hidden behind a tree about ten feet away. I could see the glint in its eye and the wind take away the fish scales as it was ripping apart its prey. Even further back in time was the pair of Ospreys that made the lake their home in May 1970. Sticks were being carried and a likely nesting attempt seemed more than a fanciful thought. Yet their efforts were perhaps merely a practise for a more concerted attempt further north as they departed never to be seen again. 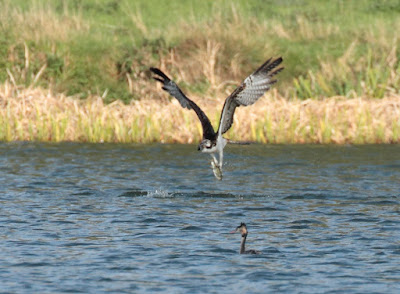 Osprey and Great Crested Grebe;two Holkham Lake fishermen, one successful as the other looks on!