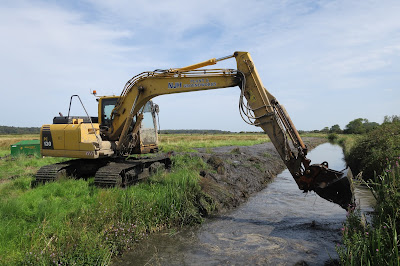 Anyone glancing over the marshes at Holkham in September and October is bound to have seen a large yellow tracked digger. Many people stop and ask what sort of work is it doing? The simple answer is that it is dredging the ditch systems, yet really the answer is a lot more involved than just simply doing a bit of dredging work.  Together with a series of sluices the ditches help us manage the water levels. For the ditches to do their job a certain amount of maintenance has to be done regularly and this means dredging out silty mud that accumulates and impedes the water flow.  As you can imagine the wildlife of the dykes is varied and often prolific. For that reason we try to work on a seven year rotation so that there is plenty of time for the flora and fauna to re-establish. 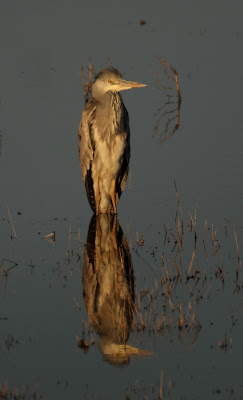 The Grey Herons of the marsh become most confiding during ditching work ever on the lookout for fish and eels.

Whilst we do not actually drive the machines ourselves we are often at hand assisting the driver in clearing up rubbish that has been ‘slubbed’ out or helping replace culverts and gateways.  It can be messy work but the amount of wildlife seen can be quite astounding. The dykes of Holkham are an incredibly important part of our ecosystem and a great indicator of their health is the presence of Eels. They are always encouraging to see and form an essential part of the menu of birds such as Bitterns and Grey Herons. It is quite normal to see two or three Grey Herons or even the odd Little Egret wandering about on the ‘slubbings’ metres  away from the digger looking for rich pickings. A good number of fish are also present, Roach in particular. We are quite unaware at just how many we have, but suffice to say there must be plenty judging from the concentrations we occasionally see and the constant fishing activities witnessed by our newest residents, the Great White Egrets. They are constantly pacing back and forth through the shallows of the dykes these days in search of fish to eat. 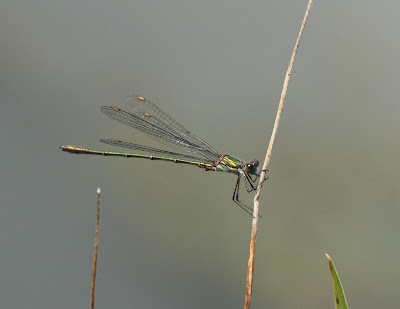 The Willow Emerald Damselfly, a new species for the reserve

As I was helping out one day this year a flash of green caught my eye on some waterside reed. It was a small elongated yet dainty damselfly. A closer inspection revealed it to be a Willow Emerald and a new species for the reserve. This southern European species first colonised the Suffolk coast in 2009 and has been slowly pushing north ever since. This year has seen more than normal numbers appear along the coast of north and it had been a species we were expecting to find at some stage. It prefers dykes that have overhanging willows where it lays its eggs under the bark. With some of our dykes having willows in sunny situations it really does look like we perhaps have the perfect habitat for a future flourishing population. 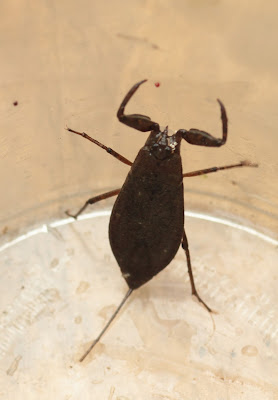 Another interesting insect seen was a Water Scorpion. This rather fierce looking insect (unrelated to a true scorpion) has a long ‘sting’ like protuberance at its rear end yet this is actually a respiratory tube that it holds above the water thus allowing it to breath underwater. Instead of having claws on its front legs like a Scorpion it actually has scythe-like front legs that are still used in a similar fashion to catch its prey. 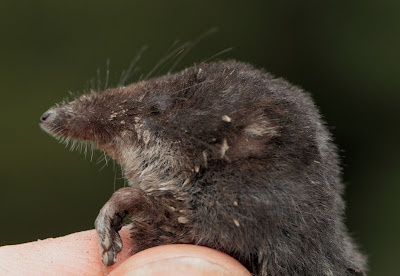 Water Shrew, a rarely seen inhabitant of the reserve's dykes

For me however the most exciting find of the year was a Water Shrew. Having been a keen naturalist for 36 years it was a species that I should have seen before but it had always eluded me. It is also said to be a relatively common well distributed species across the British Isles yet one that is pretty much solely aquatic and that was my excuse for not having seen one. There have been one or two sightings through the years on the reserve, yet never by me so when I saw a very dark almost black shrew, I knew my luck was about to change. It proved to be a very worthwhile learning experience. Water Shrews have Mole-like black fur above and most have contrasting white underparts; this one however was more dusky coloured below making it not so easy to identify. Certain features could be seen that eliminated the more widespread Common Shrew such as its larger size, its pale tipped ears and its hairy feet, toes and tail which have evolved to enable it to swim through the water with ease. It could well be a common species on the reserve or it could be a rarity, something we currently cannot answer. 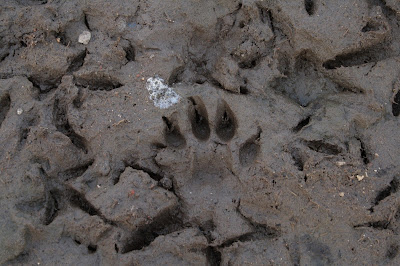 The fresh foot prints of an Otter

Another mammal that continues to elude me on the reserve is the Otter. A regular recently told me when he was young in the early 1950s he used to ‘bunk off’ school especially to watch a family of Otters sliding into one of the ditches on the marsh. Following the species nationwide demise due to the use of organo-chloride pesticides running off into river systems it took until after the new millennium for Otters to return to Holkham. Since 2012 we know through finding foot prints that the species is now present again, but being mostly nocturnal it remains very difficult to see. I think I must now be the only member of staff who works on the reserve who has yet to see an Otter here, but I’m sure that time will come soon. Another reason they are so difficult to see is the sheer distance they travel. Between Wells and Burnham Norton the reserve’s three main areas of grazing marshes are an intricate wetland of cattle grazed fields that are all bordered and inter connected by a series of fresh water dykes and ‘drains’. This again brings us back to the management of the reserve and the reasons for dyke dredging. The basic system works like this; water accumulates, be it rain water or from in-field springs and drains into the dykes which then ultimately flow out through the fields to the sea. Some are old ‘foot’ drains used from the 1700s onwards when the fields (formerly brackish and salt marshes) were drained so that the arable crops could be grown. We are able to control this flow due to a series of dams and sluices that allows us to either hold back and retain water (giving us wetter fields) or release it (thus drying areas out).