The splendour of Little Egrets 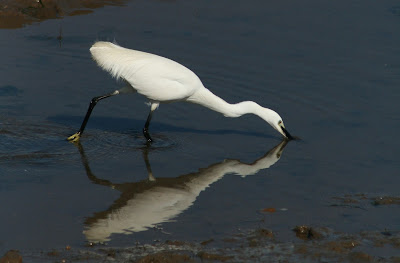 One of our most recent pieces of survey work on the reserve was to assist in a coast wide count of Little Egrets at their overnight roosts sites. These small white herons with gleaming yellow feet are now a common sight along the north Norfolk coast, particularly on the salt marshes. Here they can be seen in shallow pools or creeks, ever on the lookout for small fish or crustaceans to eat. This was certainly not always the case, they were once exceptionally rare.

Standing at dawn on a cool late September morning when the first white shapes (of a final total of 81) started to break cover and head off from the safety off their night time woodland residence and illuminated by the rising rays of sunlight, all my thoughts raced back to my first ever encounter with a Little Egret. Wells school in the 1980s boasted a thriving bird club and periodically trips would be undertaken to the various reserves along the coast. Strangely my first ever trip out with the club was along the coast to Cley and Salthouse to see Avocets and Black-tailed Godwits in 1981 yet the most exciting species we encountered was a Little Egret. This was big news at the time as a gathering of twitchers lined the coast road with all their telescopes and binoculars pointing north into the fields at a vivid eye catching white shape. Huddled into the reeds at a great distance it was hardly the most inspiring of sightings, yet it certainly captured my young imagination that all these people had actually arrived there from all corners of the country to see what essentially looked like a  white bundle of feathers. How times have changed, nowadays most birders (and certainly not twitchers) don’t even give these birds a second glance. So what happened in the intervening years? 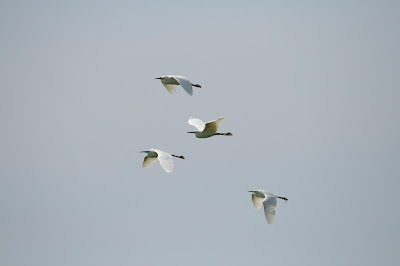 In the 1980s growing numbers of Little Egrets progressed north up the coast of France from a stronghold in more southerly, warmer wetlands. A combination of milder winters, good breeding seasons and an abundance of habitats combined with greater protection allowed the species to breed in good numbers right up to the coast of Brittany. From here greater and greater numbers began to cross the English Channel and finally after several years of a growing wintering population the first breeding pair colonised Brownsea Island off the Dorset coast in 1996. Ever increasing numbers spread out across the British Isles and by 2009 over 800 pairs were found to be nesting and a far cry from the not too distant past. 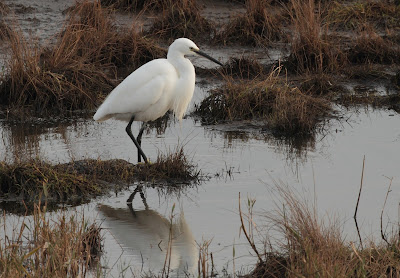 Holkham NNR actually became very much an integral part in the Norfolk story. Despite not recording its first until 1988, it actually became the first place to have a wintering pair (on the NNR’s saltmarshes at Warham/Stiffkey) and then the first breeding birds in 2002 (in a wet woodland site within the grazing marshes). From the first five pairs in 2002 their increase was swift; by 2004 up to 42 pairs nested, making it the county’s premier site for the species. Thanks to global warming we gained a new resident species that had barely been given a thought of being a potential colonist until changing times in the 1980s. Its sudden appearance and colonisation almost matches that of the Collared Dove a couple of decades before. 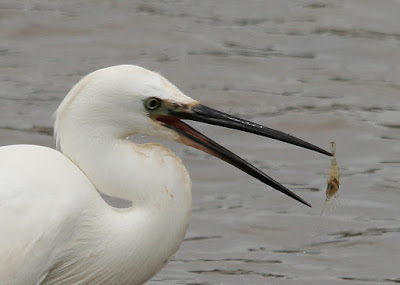 Shrimps are one of the main sources of food.

Little Egrets can be seen these days in any spots where there is marshy ground and suitable prey can be found although the saltmarshes and harbours still attract the lion’s share. Here the tidal rhythms ensure that there is a plentiful food supply of crabs, shrimps and fish. Take time to sit and watch an egret feeding and you will be enthralled at their various methods. Sometimes a bird might be standing rigidly still, head cocked to one side waiting for a movement below whilst another favoured technique is foot shuffling. Then the bird moves very slowly with seemingly only its feet quivering under the water to stir up the mud and water and provoke movement of any potential prey. Another method sometimes seen is the half wing cocked position when its wings are held partially aloft and spread out, thus creating shade below. This may be as much to enable the bird to see well as for fish to enter under a calmer place thus leaving them vulnerable for a fatal strike from the egret’s sharp bill. Egrets are usually solitary feeders but occasionally larger congregations may be seen when a feeding frenzy erupts with birds chasing in every direction amidst a shoal of fish. 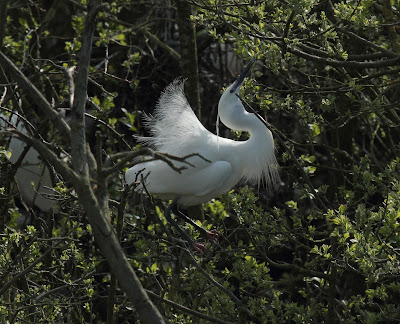 Part of the courtship rituals during the breeding season

Always seemingly immaculate, Little Egrets take on an even more beautiful new identity in the spring and summer when they are breeding. Elaborate plumes grow on their crown and fine lace-like feathers grow on their backs. These form part of highly involved social displays and to witness such a sight instantly leaves the impression that one of the finest rituals of any European bird has been witnessed.