Wildlife from the window of a tractor 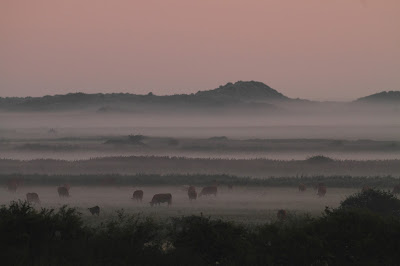 Working on the nature reserve has many rewarding days. That’s probably very much an understatement – nearly every day has its rewards! There is nothing better than seeing some wonder of nature whilst carrying out work on the reserve. For me, that’s as much as the changing skies that come with the contrasting seasons. Varying lights and weather means that even the same view can look totally different, in fact seldom the same and very often quite dramatic. Sightings of wildlife also seem more memorable for me when carrying out actual physical work. A glance up at the right moment to witness a specific bird or a butterfly can be enough to break up the day and enliven what sometimes might seem an unrewarding task. 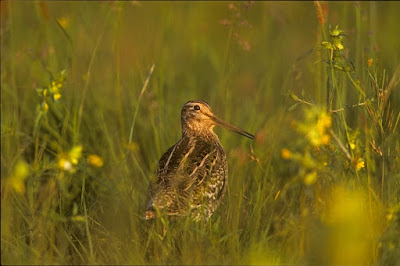 One of those ‘once in a lifetime’ experiences happened in 2005 when I was ‘topping’ the marshes by tractor not far from Lady Anne’s Drive. I had just got to the last strip of grass to cut and up popped an exceptionally rare bird from north eastern Europe - a Great Snipe. Closer in size to a Woodcock than its smaller and more common relative, the Snipe, this cryptically marked wader of almost mythical desire amongst the twitching fraternity was there right in front of me, sitting beside my front wheel! It made the memories of long days behind the wheel of a tractor getting stuck in wet fields fade away in an instance. It is also true to say I would never have seen it had I not been there working in a tractor. A similar thing happened only recently, the last strip of dyke side vegetation cut and there sat a rather regal and annoyed looking Short-eared Owl. Some naturalists say it is bad to anthropomorphise but I defy anyone to look into the eyes of a Short-eared Owl and not do so! This particular one really did look like I had ruined its day by gate crashing into its own wild world. 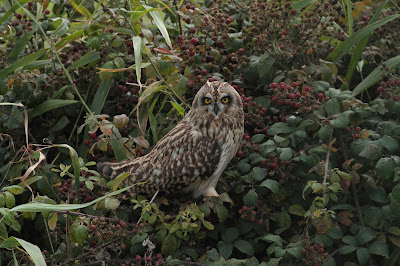 A newly arrived migrant Short-eared Owl as seen through the window of a tractor !

Some birds seem oblivious to the movements of tractors and the amount of exciting species or unusual behaviour I have seen whilst working has been quite remarkable. It is not just birds either, sometimes mammals otherwise not seen can be observed. Species such as Short-tailed Field Voles are common and are often seen scurrying away before a Kestrel swoops down to catch one. Birds like Grey Herons and Kestrels seem to be in tune with our workings and soon appear once mowing commences. The same behaviour was noted with Red Kites in the Park recently too. One of the least seen mammals is the brightly coloured yet diminutive Harvest Mouse. There are undoubtedly more about than we realise as normally the only time I manage to see one is whilst topping. This year I was very lucky to see one run off and swim across one of the dykes, its bright orange coat looking like a lost sweet wrapper drifting across the water. 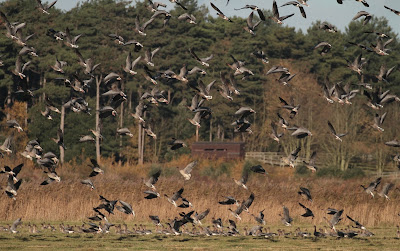 Newly arrived Pink-footed Geese preparing for a winter in Norfolk

So, if our fields on the reserve are all grass meadows with no crops, why do we spend so much time in tractors on the marsh? The grazing marsh meadows form part of a very valuable and declining habitat in the UK. Lowland wet grassland disappeared dramatically in the 20th century due to drainage schemes and conversion to arable fields. In doing so, many of the species that formerly thrived in them started to decline to almost disastrously low levels. At Holkham we are fortunate in having up to 535 hectares of wetland, much of which is wet meadowland. For it to remain attractive to our key breeding species such as Lapwings, Redshanks and Avocets and also our wintering birds like Pink-footed Geese and Wigeon a lot of fine tuning and effort goes into achieving the right conditions. This involves controlling water levels, extensive grazing by cattle, dyke dredging, providing scrapes, pools and islands and mechanical topping by tractor driven mowers. By using mowers, areas that the cows ignore can be topped thus preventing them turning to scrub and the correct sward height of grass can be obtained and hopefully making them the ideal habitat for nesting Lapwings next spring. 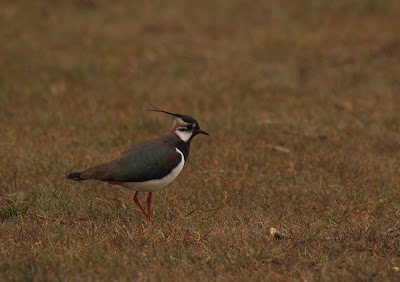 If we have missed spots from our topping system all is not lost as this week alone we have close on 10,000 newly arrived Pink-footed Geese from Iceland on our meadows, which means quite a lot more grazing ! Typically the first few birds arrive in the first few days of September, but this year they seemed slightly later arriving but when they did appear it was in greater numbers than normal. Over 100 dropped in on 13th September and quickly increased to 1100 on 15th and over 10,000 by 21st. If you are visiting Holkham in the next few weeks take a look for the geese. In recent years we have typically seen big build ups in October before the birds disperse across the county to feed on newly harvested fields of sugar beet tops. It is still one of nature's great spectacles; masses of geese clamouring for space on the marshes, their calls reaching fever pitch amidst vast skeins often illuminated by spectacular sunsets.

Part of an early autumn mass of returning Pink-footed Geese