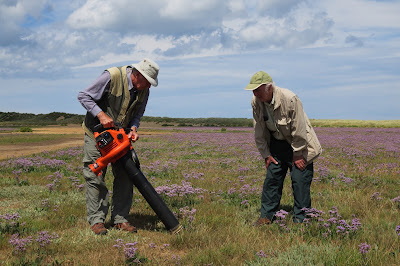 This summer we were involved with two quite high profile local events at Holkham that proved very rewarding for not only members of the public but also for the members of staff involved. Firstly came the coast wide Bio-blitz. This involved enthusiasts from every branch of natural history descending into all the various habitats along the coast and trying to identify and record as much as they could find. This was open to keen specialists, experts, and County recorders alongside general members of the public. Here at Holkham alone we managed to record nine new species of fungi for the reserve (including a new species for Norfolk – a very insignificant looking ‘black smudge’ fungi), a spider only known from one other site in Norfolk, a hoverfly only previously recorded in the Norfolk Broads (the Sea Clubrush Hoverfly) and two new beetles for the site. For a site that has been a nature reserve since 1967 this was quite a selection. 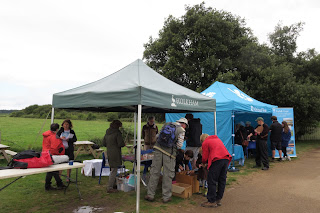 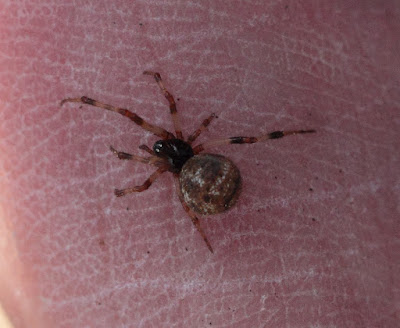 Achaearanea riparia,a new spider for the reserve and a county rarity

Rarities aside the joy showed by children as they were shown moths brought out from some overnight traps was priceless. For many, moths are the poor man’s butterflies that only come out at night, are drab in colours and munch clothes in our wardrobes. Nothing of course can be further from the truth. Here in the UK there have been an incredible 2,500 species recorded. So whilst it is true many are nocturnal (hence the need to attract them and catch them aided by uv lighting) many are also day flying and many are impressive looking colourful beasts. For most children when they see something like a hawkmoth for the first time they are often overwhelmed that such a mystical looking creature can exist outside of a fantasy novel. To see a child over awed from a moth or grasshopper clinging to its finger can be quite magical. 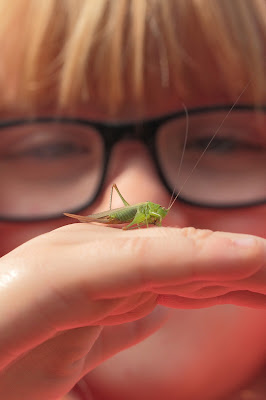 A Long-winged Conehead, an exotic insect that always attracts attention

At Holkham we took this a step further this year by running a mini-beast hunt in Wells Pinewoods as part of the annual carnival celebrations. On two days we set up shop along with the Estate’s Education Department in the hope that a few children might pop along and find us a few insects and other creepy crawlies to inspire them and for us to identify. When the start time arrived we found ourselves under an avalanche of small children eager to hunt out, collect and bring to us for identification what they had found. Initially it seemed like a happy form of pandemonium. There were children dashing about everywhere, turning over logs, peeling off tree bark, crawling underneath bramble bushes, clutching pots and nets with wood lice, worms, centipedes, beetles, butterflies and even toads. Their enthusiasm was infectious and the event proved even more successful than we could imagine. The excitement shown was both non stop and heart-warming. On an even bigger plus side, they produced the goods too. 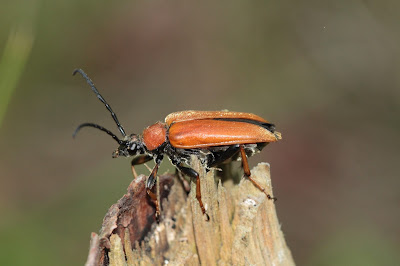 The Red Longhorn beetle is a relatively scarce insect that has its UK stronghold in the south of England, particularly the forests of Breckland. It also has an outpost along the north Norfolk coast with the conifer wood of Holkham and Wells being a known site. What we did not realise was just how many we had. In the two days at least 15 were found all within a restricted area of the wood. An adult Ant-lion was also found, a specialised insect of the woods that still very few Norfolk naturalists have ever set eyes upon. One of the strangest finds, more due to its circumstances, was the reserve’s first ever Woodlouse Spider. It fell out of a branch and straight onto the arm of one of our visitors, amidst a chorus of shrieks! It is armed with ferocious looking jaws that enable it to pierce the armour plating of a wood louse (its main prey), hence its name. No bites occurred to our visitors though! Ultimately it was great to see such interest in our natural world and left me hopeful that at least some would become the next generation of field naturalists. It also left us hoping that the next time a bio-blitz is organised we can get an army of small children with keen senses to scour our vegetation and even more might be found! 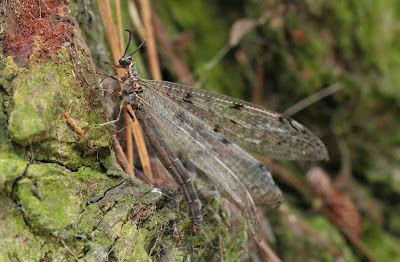 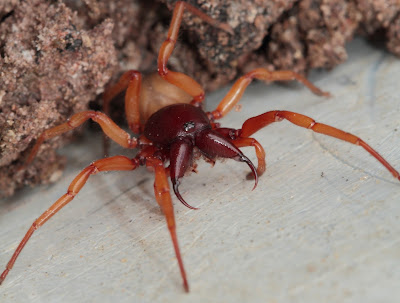 The Woodlouse Spider, with its impressive jaws opened wide!