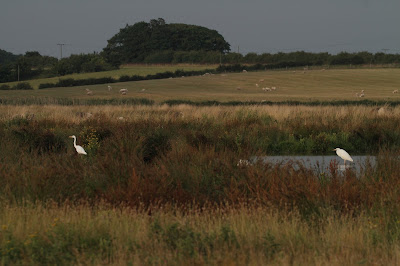 Holkham has seen many changes in its wildlife over the years. Species have been lost and species have been gained and at the moment it seems we are very much in the ‘gains’ camp. Global warming has been attributed to many of the new insect arrivals and indeed some of the birds too. Arguably the most spectacular of our newcomers is the Great White Egret, a relative of our familiar Grey Heron. Gleaming white, standing close to metre tall with a wing span up to 170 cm it makes both a striking and imposing sight in its new found North Norfolk home. 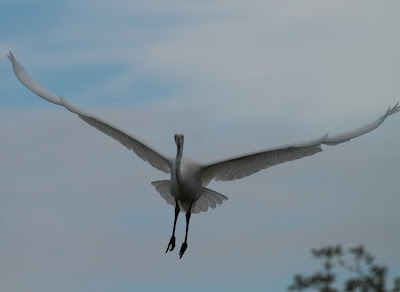 This pretty much cosmopolitan bird of the world’s warmer climes was once exceptionally rare in the UK until relatively recent times with no sightings before 1960. With the Great White Egret it was more the case of a bird that was heavily persecuted in mainland Europe to such an extent that it almost disappeared completely before protection measures and habitat enhancement enabled its population to grow again. Unlike many birds that were hunted for food, the Great White Egret’s downfall was its beautifully elegant white cloak of fine wire-like feathers; its ‘aigrettes’. These are grown in the breeding season and form part of the bird’s elaborate courtship behaviour. It spreads them upwards and outwards like some giant monochrome Peacock ! As well as attracting a mate, the feathers attracted far more sinister admirers. Birds were killed in their thousands worldwide to supply a growing trend for fashionable hats made from the aigrettes. It took a lot of hard work by a fledgling Bird Protection Society in Victorian times (the forerunner of the RSPB) to lobby governments and finally get the practise to cease. 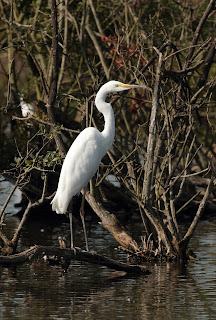 Against such a background of persecution it could be seen to be a real triumph for conservation that such a spectacular species survived and prospered again. For much of the 20th century Great White Egrets clung on to isolated wetlands in south Eastern Europe; Austria, Greece, Hungary and Yugoslavia were its haunts. Since then it has slowly reclaimed much of Europe with France having its first breeding birds in 1994 increasing to 165 pairs by 2010. From here ever increasing numbers have winged across to England culminating in the first ever nesting at Somerset in 2012. 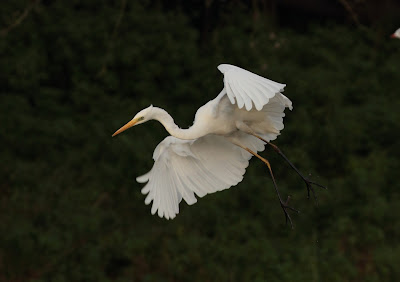 Great White Egret coming in to land at Holkham Lake

This brings us finally to events at Holkham. Only a few had previously been seen here before a long staying bird appeared at Burnham Overy marshes in October 2014. Here it was happy to spend over a month wandering about often eating moles alongside our herd of Belted Galloway cows. It looked a very odd combination – stately white giant bird of Eastern origin alongside short stocky black and white cows from the lowlands of Scotland! It seemed rather comical that when the cows moved to Holkham, so the egret followed. When the cows were finally taken to Warham to overwinter, so the lonely egret stayed only a few more days before departing to the west. The next autumn saw what was perhaps the same bird return and by the spring and summer of 2016 it was joined by five others. This would have seemed unbelievable only a few years previous. Following the successful breeding at Somerset, we soon became hopeful that a similar occurrence might be forthcoming at Holkham. Things moved quickly and incredibly pair nested late on in the 2016 breeding season. Despite allowing no disturbance and keeping their whereabouts a secret the pair failed only a few days away from their eggs hatching. Although a huge disappointment we did not have to wait too long as this year we were pleased to announce that a pair did breed again and this time produce three healthy looking flying youngsters. We have officially become home to the UK’s only nesting Great White Egrets away from Somerset! 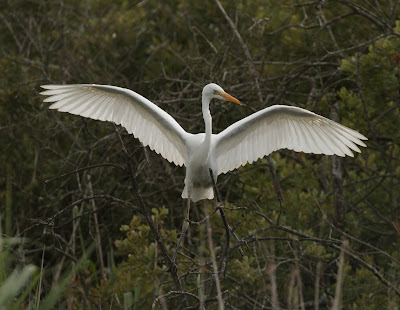 Here a juvenile Great White Egret is getting ready for its maiden flight !

As well as our breeding birds we had some very other notable occurrences. Firstly in April a vagrant Black Kite from southern Europe appeared, only to be escorted away from the wood by a Great White Egret. This might well have been the first time ever in the UK that these two rarities were seen flying side by side! It was also a bit of good fortune maybe, as Black Kites are known to actively search out the eggs of egrets and herons in European colonies, so our newest residents acting as 'guard dogs' perhaps did us a bit of a favour! Another interesting sighting was that of an egret bearing colour rings on its legs. After a bit of research we found out that it had been ringed on the Atlantic coast of France as a nestling in 2013 and not been seen thereafter. As far as we are aware it is the first colour ringed bird to have been seen here in Norfolk. 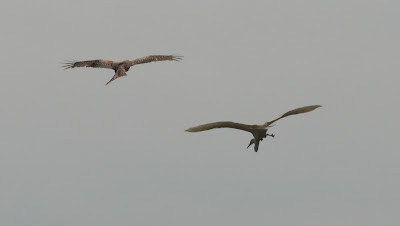 Currently all the birds can be seen with relative ease. They favour the dykes and pools of the grazing marshes and despite often disappearing down into the dykes to feed on fish it is not long before one emerges to fly over the marshes. Their huge size and ponderous flight makes them look rather like albino eagles from a distance! Last year up to two birds regularly started to catch fish alongside the road in Holkham Lake close to the hall. It allowed an incredible insight into their lives and behaviour as they were oblivious to passers-by. In the meantime either of our hides offers a good chance of a sighting and with autumn now approaching it could be that you might see one in the skies with thousands of Pink-footed Geese returning for the winter. Now that would be a surreal sighting!