A Kaleidoscope of woodland colours 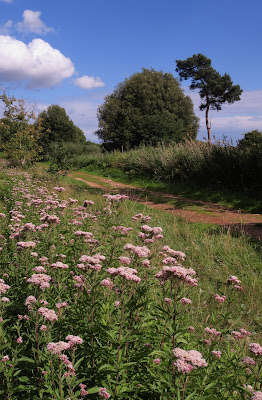 Hemp Agrimony growing alongside the track near Meales House at Holkham

One piece of valuable work that we undertake every winter and then on a couple of occasions throughout the summer is to maintain the ride side vegetation alongside the southern edge of the main pinewood track at Holkham. This involves cutting back invasive bracken and reed to give more beneficial plants breathing space.  In doing so an incredible habitat forms for an abundance of insects that are attracted by the bountiful supply of nectar. One of the most numerous plants is Silverweed. As its name suggests it has a silvery hue (on its jagged leaves) and is always one of the first plants to emerge up in the spring. It is both abundant and subtle yet could easily be overlooked even though its small yellow buttercup-like blooms seems to be a constant feature of the rides all through the summer. Whereas Silverweed is low growing ground cover, in contrast the dainty stems of Common Centaury stand slightly taller. These pink members of the gentian family again seem to be in flower all through the late spring and summer. Not only do they grow on the ride sides but also in the older sand dunes of the reserve. 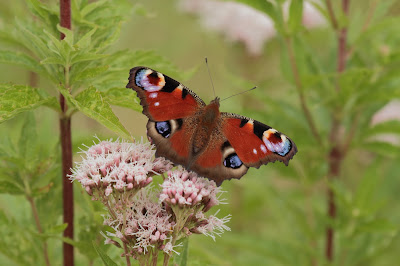 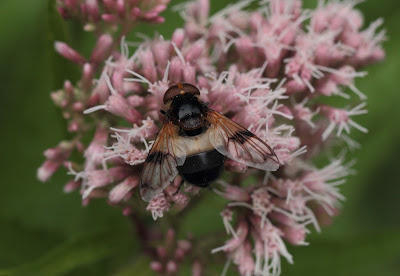 The real draw for insects however are two more very different plants. One of them, Hemp Agrimony, is impossible to overlook as it grows to just over a metre tall and has a mass of tightly knitted pink blooms. The plant has long been used in herbal remedies for treating cold, flu and high fever. For us at Holkham it is our major source of summer nectar and an absolute magnet for insects, butterflies in particular. From mid-July to mid-August take a walk past Meales House and see for yourself. On a hot day the air above the plants will be teaming with activity. Up to 27 species of butterfly alone have been recorded over the years feeding on the plant. From tiny moth-like Small Skippers up to the large and well known Red Admiral, all shapes, sizes and colours in between make up this diverse group of insects. Here on the reserve we take part in a transect organised by Butterfly Conservation to monitor trends and abundance of all the butterflies. It involves walking the same route weekly, something that has been done continuously since 1976 and is one of the longest constant effort sites in the country.

At Holkham we have been lucky, we have yet to actually lose any species, in fact we have actually gained 11 species. Surprisingly some common species were not noted initially. The first Comma (now a common species) was recorded on the transect in 1980, the first Holly Blue in 1991 and White Admiral in 2003. All are distinctive in their looks and with patience and luck all can be seen at Holkham in July.  This year we have seen large numbers of Red Admirals, three years ago it was all Peacocks and Painted Ladies. You might even be lucky and see a scarcity such as a White-letter or Purple Hairstreak or a Silver-washed Fritillary. The latter is very large black striped orange species that has only moved to Norfolk in recent years from woodlands in the south of England. The variety of butterfly colours can be overwhelming when seen for the first time! 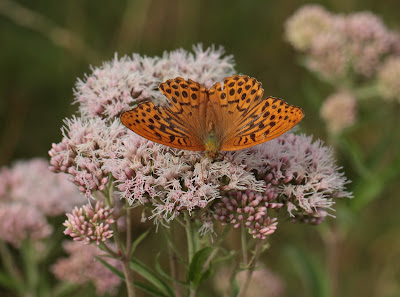 The Silver-washed Fritillary, once rare in Norfolk but now on the increase

Another more subtle plant that grows along the same ride, yet blooms slightly later is Fleabane. This warm yellow plant also grows in thick clumps but unlike Hemp Agrimony is lower growing (standing about 60 cm tall) and hence seems to attract a variety of the smaller butterflies such as Common Blues, Small Coppers and Brown Argus. Fleabane too had old traditional values. As its name suggests it was used as an incense to repel insects, while another use was as a cure for dysentery. 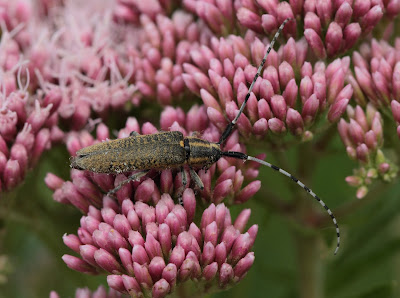 Longhorn beetles can be distinguished by their over-long antennae, this species is called the Golden-plumed Grey Longhorn

As well as butterflies the flowering plants of the woods attract an array of bees, hoverflies, dragonflies, damselflies and beetles, too numerous to mention here! Keep a particular eye out for longhorn beetles, these can truly be spectacular. With overlong antennae they can look both comical and fearsome at the same time! So if you want to witness this mini spectacle of beasts and bugs come along before the summer is out or put a date in your diary for next year.