Foxes and Tigers of the Sand Dunes 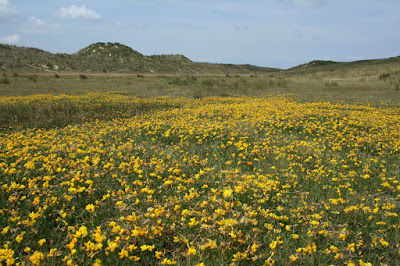 On the nice days we have been enjoying this summer if you’re at Holkham visiting the beach why not take a bit of time to have a wander through the adjacent sand dunes? As usual for the time of year the whole stretch of the coast between the pines and beach from Holkham Gap through to Overy Harbour is awash with varying hues of colour thanks to an abundance of wild flowers. The overwhelming colour is yellow. Ragwort, so despised as an agricultural weed and renowned as being a ‘killer’ of cows and horses is just beginning to bloom. More subtle and lower to the ground are the dandelion-like Cat’s-ear followed by succulent Biting Stonecrop, and even shorter in height the pea-like Bird’s-foot trefoil (often known as eggs and bacon) and Lady’s Bedstraw. The latter was formerly widely used to stuff bedding prior to the arrival of the modern day mattress. Its aroma described by some as smelling like honey (or dried hay!) was said to aid in a good night's sleep whilst the Scandinavians used it as a sedative for women during childbirth.

In contrast are the pinks and purples of rosebay willowherb. This large robust plant stands relatively tall and often grows in dense clumps. In the past it has grown most prolifically on ground that has been scorched bare by fire (hence its often used name ‘fireweed’) but thankfully we have escaped fire ravages of a major scale in recent years. In a good year it can create a distinctive pink swathe through the older dunes. All these plants provide a home for a bewildering array of insects ever in search of nectar. It really is the time to be out in the dunes in search of our native wildlife. 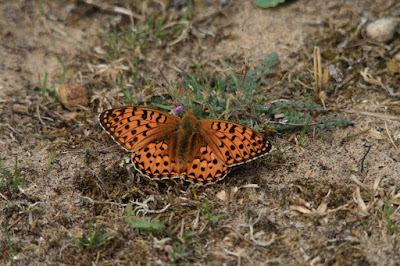 Look out specifically for the Dark Green Fritillary butterfly. This orange and black ‘sprite of the dunes’ moves fast from bloom to bloom,  unless you are fortunate enough to find one that has just emerged. Then its full range of colours can really be appreciated. With its orange and black chequered upperwings and its stealth like movements I often liken it to a tiger of the insect world! So if it is orange and black why is it called the Dark Green Fritillary? If you are lucky in gaining a close up view, look out for very fine dark hairs covering its thorax and also its beautiful green underwings with white spots. These spots when seen on the right day can shine with an iridescence that makes them resemble jewel-like pearls. These are best seen when the butterfly is low to the ground. I have occasionally seen the odd one actually laying its eggs in the sand on the small stems of violets that its caterpillars like to feed from. 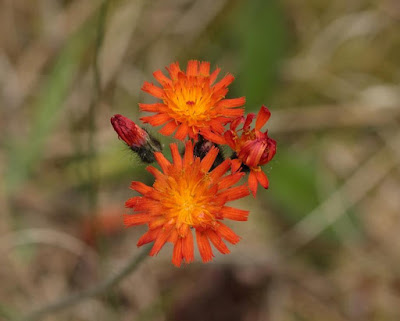 Foxes and Cubs, sometimes referred to as 'the Devil's Paintbrush'.

One plant that offers a slightly different hue is the striking orange Foxes and Cubs or Orange Hawkweed. It too is a great source of nectar. This plant however is not a native, being introduced to the UK in the 17th century from Europe. It gains its main English name from the orange colour resembling a fox’s fur and the buds found in waiting underneath looking like its cubs. Yet another old name for it is the rather more sinister Devil’s Paintbrush.