A touch of the Mediterranean 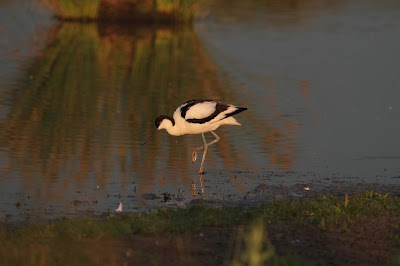 This year has so far produced mixed fortunes for the reserve’s breeding birds. April proved cold whilst dry conditions prevailed through the spring, making the marshes less productive for our Lapwing population. The same however could not be said for the Avocet. This iconic bird has long been a sign of good conservation management. With many of the grazing marshes drying out quickly and areas of soft mud (so beloved of wetland birds) turning concrete hard we were extremely thankful for work that was carried out last autumn. The RSPB spoil spreader restored some of the in-field creek features that are a remnant of the days when the freshwater grazing marshes were salt marshes.  By removing the vegetation, the resulting muddy edges prove attractive for terrestrial invertebrates essential for birds to feed on. One particular area at Holkham proved an absolute magnet for birds. Black-headed Gulls were first to colonize and ended up at just over 200 pairs whilst Avocets quickly followed. By mid-June we counted 17 nests in one small area that had benefited from the attention it received. Ultimately, 76 pairs of Avocet were found nesting on the grazing marshes and we  had a count of 288 birds on one single day, a record for the reserve. At this busy time of year the marshes can be a cacophony of avian noises. Gulls shriek, Lapwings wail, Avocets ‘Kluut’ (their distinctive call and coincidentally their Dutch name too!) and Redshanks yelp. Sometimes the gulls take eggs or young Avocets but by and large they are sociable neighbours. There is also safety in numbers. Just watch when a marauding harrier or Herring Gull flies over head – the noise level increases as seemingly every bird gets up to drive the potential predator away. Lone nesting birds are much more at risk than those that favour larger congregations. 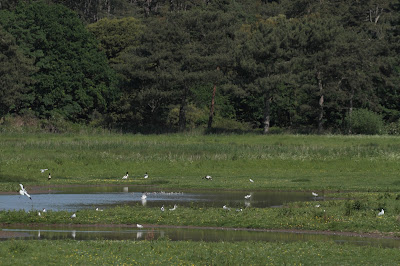 Holkham’s marshes where work had been carried out the previous autumn alive with Avocets, Shelducks and Black-headed Gulls. 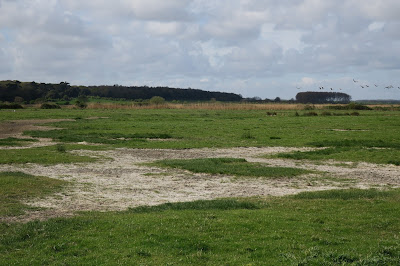 A less productive area that dried out quickly in a rather parched April. 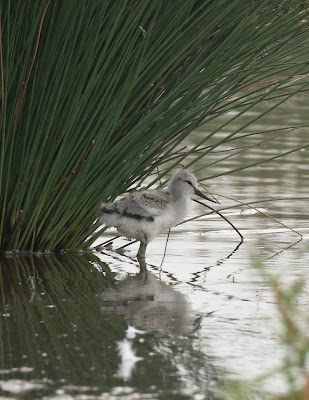 Avocet chick at about a week old.

The Avocet’s fortunes have not always been so rosy of course. Once plentiful along the marshes of the east coast of England it was persecuted to such an extent that in Norfolk it became extinct in the 1800s. Not only were its eggs collected to make puddings and pancakes but the birds themselves were shot, sometimes as a means of expelling spare ammunition after a day of shooting other quarry. As the birds became scarcer they became more desirable for collectors of eggs and stuffed birds, popular activities of the Victorian ‘naturalist’. Things changed very slowly and from the 1940s onwards birds began to nest again, initially at the offshore shingle spits at Halvergate Island and at Minsmere in Suffolk. Numbers slowly increased and by 1977 it was nesting again in Norfolk. At Holkham, the Avocet started breeding in 1989 thanks undoubtedly to the wetter grazing marshes that are managed with birds in mind.

Another very similar species to the Avocet, yet even more exotic is the Black-winged Stilt. Very much a bird of warmer climes it made the headlines nationally this year with multiple and unprecedented breeding attempts, including three pairs in Norfolk alone. We welcomed our first ever Black-winged Stilts to Holkham in May. However, the three pairs only stayed for a few hours. With global warming and ever growing numbers appearing in the country this could well be the next species to start to nest regularly. With our marshes suitable for Avocets (the same habitat of stilts) we await the future with great interest. Along with Spoonbills and Little Egrets the scene is becoming increasingly more akin to that of the Mediterranean. What will be next? 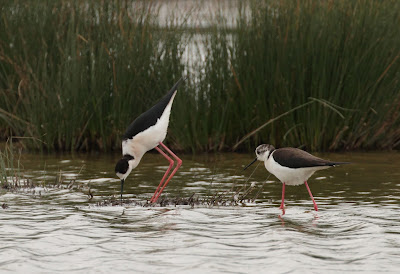 Holkham’s first ever Black-winged Stilts – sadly they only stayed a few hours.