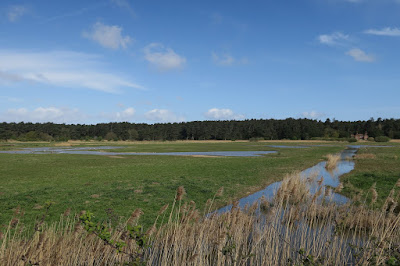 Biodiversity is a word we constantly hear in conservation circles these days. In a nutshell it describes the amount and variety of life found within a given area. Holkham is lucky. It has huge swathes of differing habitats within the boundaries of the NNR and therefore a huge amount of biodiversity. This is perhaps more obvious to the casual visitor than they might think. Even on a brief walk from the car park at Lady Anne’s Drive, along the boardwalk to the beach the visitor will pass through grazing marsh, pine woodland, sand dune, saltmarsh and foreshore. Just pause and look around and that biodiversity, that variety of life can soon be appreciated.

This all became even more apparent to me very recently. I was walking alongside one of the grazing marsh dykes carrying out our breeding bird monitoring. The dyke did not look particularly special, reed fringed with the shallower banks peppered with contrasting blooms of Water Parsnip and Water Forget-me-not providing a welcome splash of colour. It looked like any other dyke that can be found along the North Norfolk Coast. But was it? Whilst looking out for broods of Shoveler, Mallard and Coot I started to notice all manner of insects and invertebrates clinging onto or flitting in and around the reeds. Particularly obvious were a number of brightly coloured beetles of the family Donacia or ‘reed beetles’. They shine with iridescent golds and greens. Many were coupled up mating on the stems whilst others were flitting about singly in search of a mate. Up to 15 species are found in the  and most require microscopic scrutiny to enable definite identification but for the un-initiated just watch them and revel in the glory of their jewel-like metallic colours. They are always found near water as the larvae live an aquatic life. 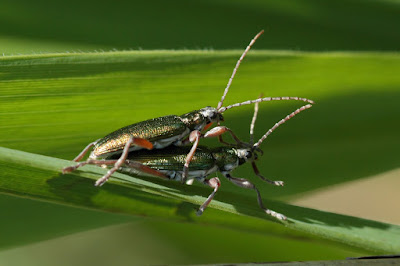 Donacia clavipes, a species of reed beetle new to the reserve.

Not far away was another vibrant metallic blue/green insect – the Blue Shieldbug which lives on beetles. Another shining black beetle turned out to be a very rare species, Plateumaris braccata. It is a localised wetland inhabitant of southern and was a new species for the reserve. Not bad considering the reserve already has over 832 species of beetle on its list! Spiders abounded too. Most obvious were the Tetregnatha or ‘stretch’ spiders. They are very long bodied spiders with exceptionally long jaws. They too exhibit a metallic sheen but this time more silver than gold. Their webs are frail and simple, sometimes horizontal to the water’s surface with the actual spider sitting in wait nearby in a characteristic pose, with legs and body stretched out up the stems of vegetation. It would be patiently waiting for any moth or fly that would hopefully cruise into its web. A tiny but delicately marked almost white moth was not far away, the Small China-mark, another wetland species; its larvae live underwater and feed on duckweed.

The Blue Shieldbug, a devourer of beetles.

Another seldom seen inhabitant of the reserve was an insect and quite a spectacular one - a sand loving beetle called Cleonus piger. At close on 20mm with its large ‘nose’ (or rostrum to give it its technical term) it has quite a comical look, with some likening it to a miniature ant-eater! It has been seen on the beach/dune edge where its distinctive tracks in the sand give its presence away. 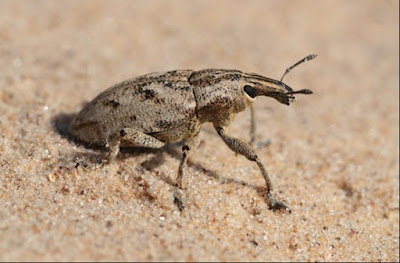 This was just a snapshot of the variety of life found within one small fragment of grazing marsh, but illustrates perfectly just what can be seen if the time is taken to look. The commonplace can be very exciting when viewed for the first time and there are often creatures that are not commonplace, just there awaiting discovery.  So, if all this grabs your attention why not take part in the Norfolk Coast BioBlitz weekend on 22nd and 23rd  July? This event is open to everyone from novices to experts and aims to find and identify as many species as possible from Holme to Salthouse over a 24 hour period.  For more information check the events page at www.holkham.co.uk