Winter certainly gripped the reserve throughout January. The month was plagued with dense fog, ice and cold temperatures. The storm surge mid-month made things even more exciting. 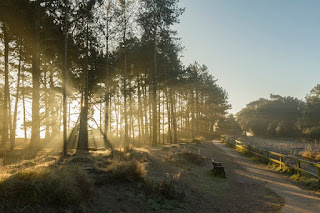 January had some great sunrises.

The last goose count of the winter yielded 23,500 Pink-feet but they quickly departed throughout the month to start their long migration back to their breeding grounds. Brent’s have continued to remain on site in great numbers especially on Overy Marsh. We even had a lonely Pale-Bellied Brent seen at Holkham. Strangely a Goosander was seen sheltering in Wells channel, an unusual sighting in this part of the world. 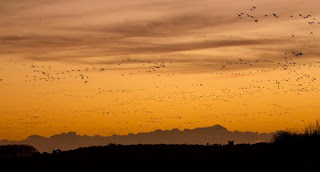 January has also been a great month for a host of other wildfowl including almost 14,000 Wigeon, 1,000 Teal and 133 Shoveler. Lady Anne’s Drive was an excellent (and convenient) spot to watch them from. 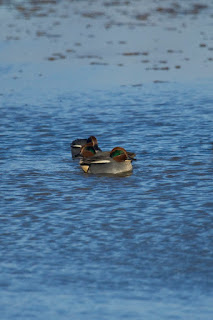 The strong winds made for an excellent sea watching opportunity. The 32 Shore Larks and 35 Snow Buntings were popular with birders but after the storm surge Slavonian Grebe, Short Eared Owl and even a Red Neck Grebe  were reported in Holkham Gap (through neither of the wardens were able to see them). Flocks of around 800 Scoter as well as Velvet Scoter were seen from the beach. 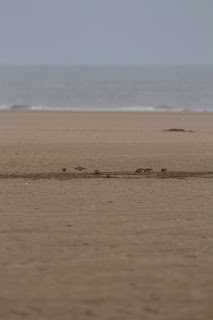 A Turnstone feeding an Slip Limpet.

This winter has been a great time to see Glaucous Gulls and Holkham has been no different as they scavenge off dead seals. An Icelandic gull was also reported at Wells. 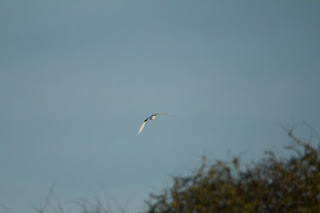 The only photo of a Glaucous Gulls I got!

Hunting Peregrines made a spectacular nuisance of themselves during the WeBS counts but it was during our post storm surge litter pick at Warham that we saw a juvenile hunting Redshanks over the Marsh. Marsh Harriers and Buzzards were also regularly seen but Red Kites remained strangely absent.
A Redshank at Warham
There were plenty of passerines around with a good number of Stonechats and at least three Rock Pipits at Overy Bank. There was a notable influx of Song Thrushes, Blackbirds and Waxwings. Also notable today was the reappearance of Skylarks which seem to have been totally absent recently. While emptying dog poo bins in the morning I often saw Kingfishers, a Barn Owl and Pink-feet which is a bonus when  doing  this unpleasant but necessary job! Finally, 20 Yellow Hammers feeding in the hedgerows rounded the month off nicely.

Also a notable sighting was my first view of a Holkham Otter! I watched it swim through Wells channel while I was eating fish and chips on the Quay!
Newer Post Older Post Home