October is a month that every birdwatcher in Britain waits for with great anticipation. It is at a time when birds from all parts of the World are on the move. Whilst our own familiar summer breeding birds such as Swallows and House Martins are beginning their journeys south for a winter south of the Sahara Desert many other less familiar ones are actually heading our way. From the taiga forests of northern Europe, thrushes like Redwings and Fieldfares start to arrive while wildfowl and wading birds such as Pink-footed Geese, Wigeon, Teal, Brent Geese and Dunlin amongst many others come from the Arctic tundra of Greenland, Iceland and northern Russia.

The thing that makes North Norfolk so special at this magical time of year is that it juts out into the North Sea, making it the first landfall for many migrating birds as they leave Europe. This is where and when Holkham really comes into its own. Ever since the late 1960s when the study of migration became more popular, Holkham with its mix of coastal sand dunes and woodland has always been a place where rare and unusual species have turned up sometimes amidst huge numbers of commoner migrants. The phenomenon is weather dependant and first and foremost a prevailing wind from the east or north east is required. Fine weather on the continent prompts migration and with an easterly wind behind them, birds are drifted towards the UK instead of south to the usual wintering grounds. If this is combined with rain over the North Sea the results can be unbelievable. Hundreds, sometimes thousands of small songbirds can be grounded by bad weather and amongst the common species such as Robins, Goldcrests, Blackbirds and Chiffchaffs there will undoubtedly be rarer species. 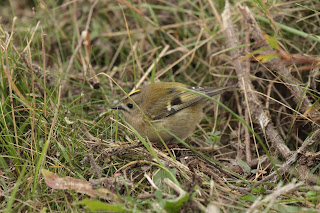 A newly arrived lost migrant Goldcrest feeding on the
ground on the dunes.

This is what sets the pulse racing of avid birders and what brings them from all over the UK with high hopes of seeing something unusual. Most regular amongst the rarities are birds that breed in the birch forests of Siberia and generally winter in the foothills and lowlands of south east Asia. It is really an amazing feat that birds such as Yellow-browed and Pallas’s Warblers, brightly marked songbirds smaller than a Wren can travel all this way. 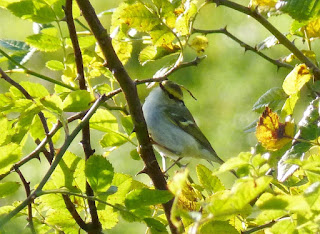 The tiny but brightly marked Pallas’s Warbler from the forest
of Siberia photographed at Lady Anne’s Drive. (Geof Douglas)

In 1975 when the wind blew easterly over several weeks an amazing variety of unusual birds made landfall at Holkham. Britain’s first ever Yellow-browed Bunting was recorded along with Norfolk’s first ever Olive-backed Pipit, Isabelline Shrike and Black-throated Thrush. It was such an unprecedented event that at the time it was described in the respected magazine British Birds as ‘the finest mainland birdwatching ever experienced in the British Isles’! Whilst such events have probably not been surpassed there have been years when it has almost been equalled. The most unusual species recorded surely has to be the Red-breasted Nuthatch that arrived in October 1989. This tiny Blue Tit sized bird actually breeds in Northern Canada and the United States and spends the winter in Central America. Quite how it ended its migration at Holkham remains one of nature’s great mysteries! 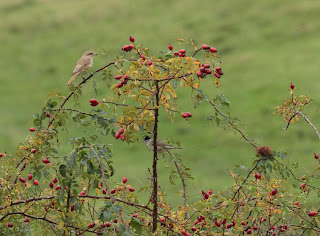 Isabelline Shrike with a male Blackcap beside the
Washington Hide at Holkham.

This year has also been phenomenal. An amazing selection of Siberian breeding species appeared and over the weekend of the 18th several hundred birders visited the reserve, with the Wells end of the Pinewoods attracting birdwatchers from all parts of the country. The list of species was phenomenal, some have suggested it was a period close to the legendary days of 1975. Prize of place went to two Red-flanked Bluetails; one at Holkham, one at Wells. These colourful Robin like birds nest across Asia from Hokkaido in Japan west to eastern Finland ! Other exceptional species included Isabelline Shrike near the Washington Hide, an Olive backed Pipit at Wells, up to 5 Pallas’s Warblers, a Radde’s Warbler, a Dusky Warbler, a Hume’s Warbler and a Blyth’s Reed Warbler. Heady days indeed for the visiting birders and a year that will go down in history as being the one that was almost as good as 1975….. 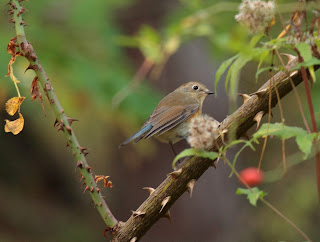 Similar to a Robin but with a vivid blue tail and red flanks,
the very rare Red-flanked Bluetail.