The sweeping grass and shifting sands of Burnham Overy dunes gives the area the impression of timeless serenity. However is hasn’t always been that way. The name Gun Hill alludes to the area’s military past.

During the Napoleonic wars there was a gun emplacement built on the site (no remains exist to-day). It wasn’t until the naval attack on great Yarmouth during WW1 that defences were built along the Norfolk coast. During WW2 the Overy dunes were used as a live firing range. Bullets, mortars and artillery shells were fired but not all of them exploded on contact. It means that almost 70 year’s later live explosives can still be found in the dunes.

As I mentioned in my previous blog a shiny new fence has been erected from Holkham pines to Burnham Overy. During the work the fencing contractors uncovered quite a few bombs. 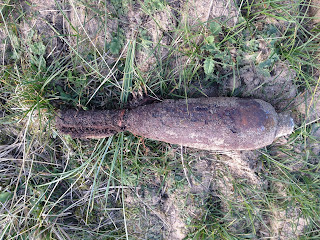 An old Mortar shell found in the dunes.

The police were called from Wells to assess a bomb and make sure the public were not at risk. They passed the details onto the RAF Bomb squad. A controlled explosion was carried out. I have seen many of these controlled detonations in my time at Holkham and usually they are very disappointing but this one made quite a bang! 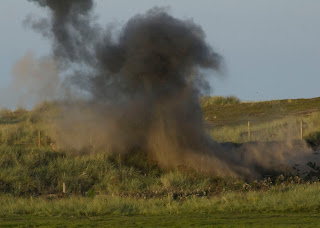 The bomb going up in smoke!


If you find a suspicious object that you suspect to be a bomb or ammunition, please ring the Holkham estate office on 01328 710227. Pass on as much detail as possible about the object and its location. Most of all please do not handle the object, old age often makes the explosive and detonator very unstable and moving them could cause a detonation.
Newer Post Older Post Home