A Duo from the Desert and Larks from the North.

October was as usual a very exciting month on the reserve at Holkham. As well as the much publicised beaching of a dead Fin Whale, almost continuous easterly winds brought a multitude of rare and unusual migrant birds, many from as far away as Siberia and central Asia. Foremost amongst them were a couple of rare wheatears. Wheatears are insect eating birds that resemble small thrushes recognisable by having a very distinctive white rump patch and a black and white tail. Only one species is found commonly in Britain, the Northern Wheatear. It breeds in upland moors and mountains and occasionally on coastal dunes. Here at Holkham it passes through in spring and autumn between wintering grounds in Africa and breeding grounds in northern Britain, Scandinavia and even as far north as Greenland. Its love of arable fields on migration gave it an apt and widely used old name in Norfolk; the ‘clod hopper’. 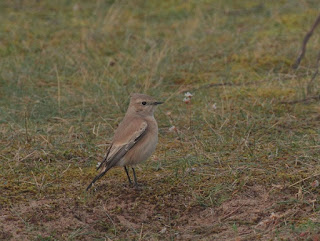 The two rarities, the Desert and the Isabelline Wheatear both arrived on the same day to the same part of the reserve. Both were also of a similar sandy brown colour. Desert Wheatears as their name suggests inhabit deserts with a range that takes in North Africa, the Middle East and throughout the steppes and deserts of central Asia. In Britain a handful arrive each year in October/November usually at coastal sites along the east coast. This year’s bird was a female (lacking the male’s black throat) and it eked out a five day stay grubbing out insects from the sparse vegetation and beach edge close to Gun Hill, a site that could be described as superficially being rather desert-like in appearance! Slightly larger and with a different tail pattern was the Isabelline Wheatear. Miraculously it remained until November 12th, the mild conditions of late enabling it to still find plenty of insect food. It breeds no nearer than Bulgaria and Greece in steppe-like fields, plains and semi-desert areas right across Asia to Mongolia and China and usually winters in the Middle East, sub-Saharan Africa and NW India. Despite its rather insipid appearance it is famed for having a fantastic voice, its song being a loud and rich tapestry of sounds ranging from clicks and squeaks to melodious ‘wolf whistles’ amidst much mimicry. In Britain it remains a bona fide rarity with only one or two every couple of years. Despite being only the fourth Norfolk occurrence it is actually the second individual to have been seen here on the reserve. 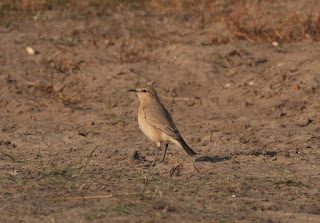 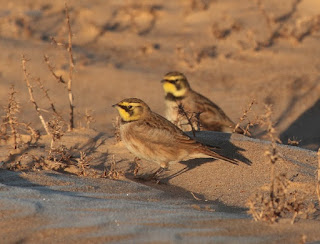 One other species that looks set to winter is the Shore Lark. This delightful song bird with neat yellow and black face markings migrates to eastern England to escape the hostilities of a winter on the high tops of Scandinavian mountains where it nests. Varying numbers appear each year but this winter looks like it will be a bumper season with close on 80 birds being present already. These restless little birds favour the tide line or areas of pioneering salt marsh where the seeds from plants such as Annual sea blite, Samphire, Prickly Saltwort, Sea Aster and Sea Lavender are sought after for food. The area between Holkham and Wells is typically favoured. The flock can easily be found and at times can be most confiding. The best technique is to find a quiet spot and wait and very often the birds may come quite close. Please give them some space. Feeding time and a lack of disturbance is an essential requirement for them in the short winter days so help them on their way by keeping dogs under closer control in this area and photographers by not venturing too close particularly if there are others trying to watch them from further away.