While I’ve been a warden at Holkham I have seen many wonderful things whether it's baby lapwings, thousands of pink footed geese in flight or beautiful meadows full of orchids. What I often don’t mention though is all the weird things I come across.


Wildlife is sometimes very strange. For instance, ant lions have so many forward facing spikes they can only move backwards, birds get lost and can appear 1000’s of miles off course and watching a crow ride on the back of a sheep while plucking out it’s wool never stops being entertaining.
Human behaviour on the reserve can be equally strange, whether it's totem poles made of dead seagull skulls or sightings of a Dutch pirate ship or even planes attempting to land on the beach (not the cleverest idea). The bizarre things a warden has to deal with! 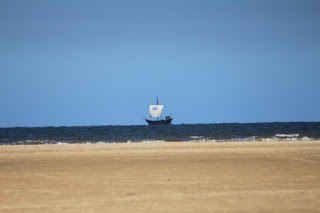 Our most recent mystery was a report of 6 large dead birds washed onshore by the tide. We had reports they were Griffin Vultures or Lammergeiers, photos showed a huge bird with a bizarre feathered patterning. Eventually we managed to catch up with these mysterious feathered monsters. 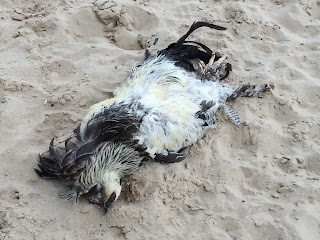 Some pondering and poking later we reached the conclusion that they were in fact, cockerels.  These large cock erels were far larger than anything we had ever seen before. It was their feet that gave the game away in the end, but what on earth were cockerels doing in the sea?!
Newer Post Older Post Home