This bizarre species of bird is famous for its elusive behaviour, strange look and characteristic call.

Bitterns are part of the Heron family but are smaller in stature and thick set with buff-brown plumage and dark streaks which allow them to blend in perfectly with the reeds through which they hunt. They are notoriously secretive and difficult to see but the breeding call can be heard from miles around. The Bitterns ‘boom’, as it is called,  is produced by the males and sounds like someone is blowing very loudly over a glass bottle! Each sound is unique and can be used to identify individual males.

Reedbed areas, which Bitterns rely on for feeding and nesting, were drained for agriculture. This, combined with persecution, led to their eventual extinction in 1885. Reedbed restoration has allowed the birds to slowly recover in number throughout Britain. Here at Holkham the re-wetting and re-profiling of land has created small areas of dense reedbed and clearing dykes has improved feeding opportunities. 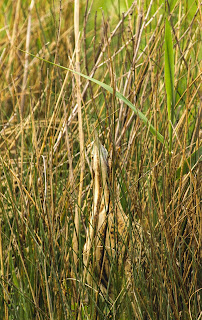 A bittern disguises itself in the reeds.


Bitterns are highly adapted to live in reeds. Their large feet are used to grasp reed stems allowing them to peer over the reed tops. They construct a nest platform in the thickest part of the reedbed close to the water level and the female will add material to the nest as the water level increases. Bitterns have a varied diet composing mainly of fish, amphibians and insects.

We are lucky enough to have a number of breeding pairs on the Holkham National Nature Reserve. The best place to see them is from the Overy sea wall or Washington hide. Due to their rare nature it is illegal to disturb Bitterns, even by accident. That is why we ask dog owners to keep their dogs under close control, or preferably on a lead.
Newer Post Older Post Home