The rain has just started to patter down on office windows here on the North Norfolk Coast, our first proper rainfall in months. While many holiday makers will be cursing their misfortune I am counting my lucky stars. The Natterjack Ponds need filling up! 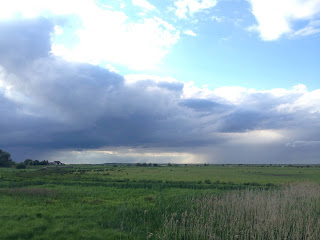 Watching the sheets of rain sweeping over Norton is
always impressive.

The hot summer weather has brought the reserve to life with the ‘swishing’ of leaves, the ‘buzzing’ of insects, the ‘bark’ of natterjacks, the ‘chirp’ of new life and the surprised ‘skwark!’ of ducklings before they are eaten by a Harrier. Overy is currently my favourite part of the reserve, not only can you hear the boom of Bittern and the call of a Cuckoo but also the growl of the Natterjacks, what a cacophony! 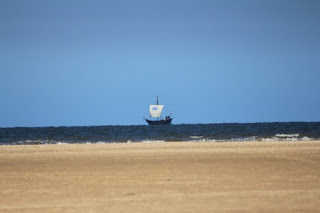 AAARRRRRR! Shiver me-timbers! Some Dutch pirates
sighted off the Beach.

The waders have been very slow this year by Holkham standards; 28 Dunlin, 11 Ruff, 45 Avocets, 6 Greenshank, 4 Whimbrel, 100 Sanderlings, 10 Little Ringed Plover and an impressive flock of 450 Black-tailed godwits. The wader list was further added to by Curlew Sandpiper, Wood Sandpiper and a Temmick Stint which could be seen on the grazing marsh’s. 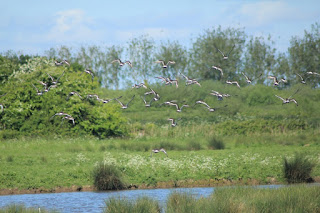 Black-tailed godwits feast on insects, worms and snails,
but also some beetles, grasshoppers and other small
insects found in the long grass of the grazing marsh.

While the Citril Finch caused much excitement at the west end of the pine woods there has been relatively few rarities present on the reserve this month. Also the number of migrants has been way down compared to previous years. Despite this Holkham NNR can still boast continued sightings of Spotted Flycatcher, Redstart, Crossbill, Yellow Hammer and our ever present Spoonbills all from the Hides. 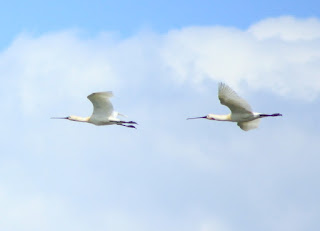 And now the good news!
This month started in style for our birds of prey with the sighting of not 1 but 2 Little Owl territories on the edge of the reserve this is the first time since 1980s. Not only that but this year’s first Osprey was seen the same day! Our birds of prey tally for this year now stands at 15 species with Merlin and Monty Harrier sightings remaining elusive. 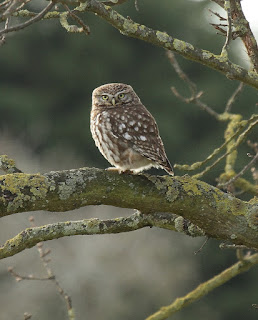 Its great to see the little owls back after so long.
It just goes to show how our continuing work on
the reserve is paying off.

At Overy and Norton the warblers (Sedge, Willow, Grasshopper and Cetti’s) which started the month with such gusto have quietened down as they start nesting however there are still Lesser Whitethroat’s singing, plenty of Whitethroats, Blackcap, Chiffchaff, Chaffinch, Wheatear and Whinchat. Also keep an ear out for our 5 Cuckoos in the pine woods and marshes. 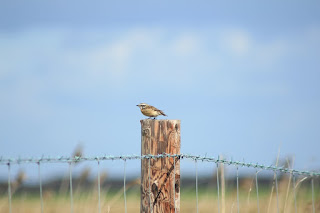 Always check the fence posts at Holkham. Lots of birds
perch on then from Barn Owls too this Whinchat

While the birds might be slow this year the insects have certainly had a great spring!  A Bedstraw Hawk Moth kicked the summer off in style followed closely by Green Hairstreak, Holly Blue and Small Copper and my personal favourite Orange-tip butterfly but it was the Broad-boarded Bee Hawk-Moth that really impressed. 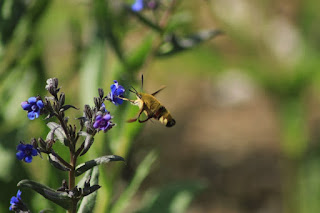 Harder to see but just as rewarding, the Damselfly and Dragonfly’s have just started to emerge from reedy areas. The Four-Spotted Chaser was the first to be seen. Look out for Blue Tail and Azure Damselfly’s fliting through the vegetation. It looks like it’s going to be a successful year for these strange but wonderful creatures. 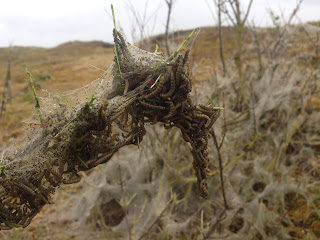 Look out for areas of ermine moth caterpillars which cover
large areas in thick cobwebs, gross and fascinating!

The best place to see these colourful pieces of summer is around Meals House as well as Holkham Dunes on a warm windless day. Broad Boarded Bee Hawk Moths are particularly difficult to see but with a keen eye and a little patience you’re bound to see something interesting.