Winter days working on the dunes 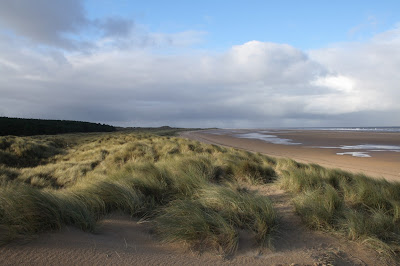 One of my favourite parts of the reserve has always been the sand dunes. Not only are the views special; the panorama from what little height we have on the reserve of sea, sand, pine woods and marshes can all be best appreciated here under the vastness of Norfolk’s towering and ever changing skies. Sometimes it might seem an empty harsh environment at the mercy of any weather that the North Sea might bring us yet the dunes hold a fantastic array of specialised flora and fauna in a habitat that nationally is constantly under pressure. For insects and birds that migrate or are blown off course from the continent it is the dunes where they usually first appear, the front line of land and there is no telling what might be seen. It all adds to the mystique of the place. 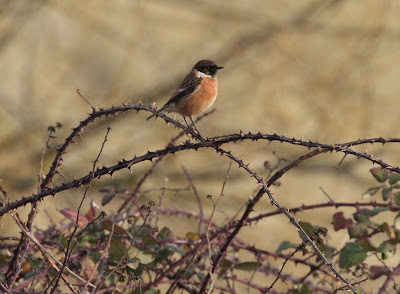 A male Stonechat, this striking looking relative of the Robin now nests on the dunes and if mild weather prevails will remain all winter.

In some parts of the UK sand dunes have been lost to unsympathetic holiday developments and golf courses which make places such as Holkham so valuable. In the summer the dunes really come into their own; we have one of the country’s best populations of Natterjack Toads favouring small sandy bottomed pools in the low lying ‘slacks’ to breed. With patience they can also be seen as they hunt for invertebrates across the open dunes. As many as five species of orchid can be found alongside a tremendous variety of insects and spiders. The list of the dunes' flora and fauna is long and constantly being added to. Birds love the dunes too; the limited scrub provides shelter for nest sites like Stonechats, Whitethroats, Linnets, Wrens and Dunnocks and is also a haven for newly arrived migrants in the spring and autumn. For that overall attraction to remain we do have to carry out regular and constant management work in the winter months which really brings us to the subject of this blog. 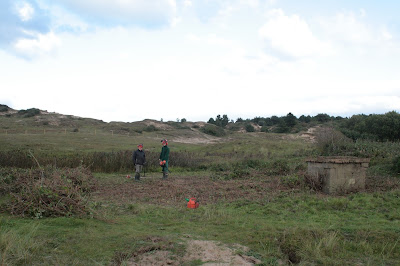 Removing bramble scrub from around a Natterjack pool. The toads like short turf around the pools in which to forage for food. In removing the bramble we also exposed an old WW2 gun emplacement.

Holkham’s dune system is part of the ever dynamic and constantly changing coastline of north Norfolk. In the very distant past they were formed from off shore accumulations of tidal debris and shingle, where marram and couch grass was able to take root and grow over a long period to form the dunes we have today. This process can take a very long time as successive periods of storms can erode and break down dunes before they truly establish although alternatively some spots form quite quickly. Take a look out in Holkham Bay today and you can still see this very process continuing. On the older dunes the current pine wood was planted back in the late 1800s. This was to prevent sand blowing across from the beach onto reclaimed arable fields and to stabilize the dunes as the first line of defence in flood and storm conditions. So whilst close on three miles of pinewoods made a new habitat, we now know that what remain as tree-free dunes are ecologically very important and this is where problems start to arise and our work starts and will continue so that the dunes' value remains intact. 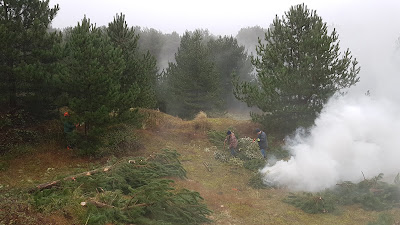 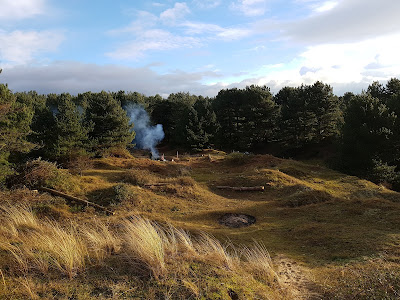 An area of cleared sand dune

One of the major problems we face is encroachment of the wood out onto the adjacent dunes. Pine trees widely disperse seeds and from these young trees soon form and left unchecked, the present day dunes would soon revert to woodland. Holm Oak is also problematic. This evergreen also readily takes root in sand and would soon really take over. These are even worse for us than pines as when they mature they cast such a heavy shadow allowing very little else to grow. Unlike pines there are also very few native inhabitants that live within them; be they birds or insects. Usually throughout the winter months we undertake management work that involves the aid of a happy and growing bunch of volunteers. With their help we try to clear areas of both pine and Holm Oak to either prevent their spread or sometimes remove established trees to reinstate the open dune habitat. 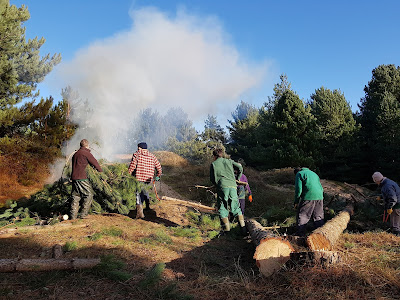 Volunteers and staff feeding the fire

Another plant we remove is the berry bearing shrub Sea Buckthorn. It too has limited value to our native wildlife and soon takes over great swathes of dune if left unchecked. Again thanks to a grand effort from both volunteers and staff alike, we have managed to clear significant areas in the last few years. Whilst we are almost ready to conclude this year’s work it will still be very much ongoing in the future so if you fancy helping out in any of our tasks, don’t hesitate to contact us at s.henderson@holkham.co.uk for more details. Not only will you be helping us with a very worthwhile project but you might also see some of our special wildlife. In recent weeks we have managed to see a very rare wintering Dartford Warbler (it had only been seen four times previously on the reserve!), plenty of Stonechats, lots of special fungi including the nationally rare Tiny Earthstar, a scarce species of spider Agroeca proxima, sometimes known as the Fairy Lamp Spider (named after the lantern – like shape of its maternal egg sac which it attaches to a grass stem and then covers in soil particles) and a tiny insect the Pine-cone Bug new for the reserve! 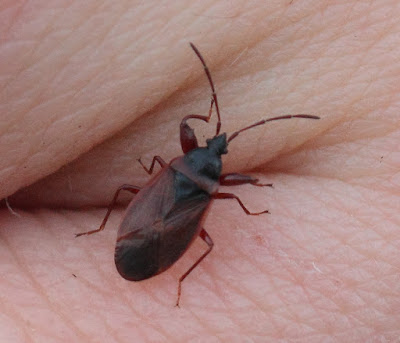 The Pine-cone Bug, a new species for the reserve 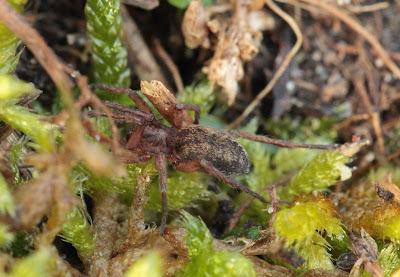