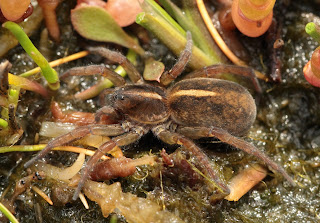 The striking Yellow-striped Bear Spider, a rare saltmarsh inhabitant of the reserve.

The fact that Holkham has been a national nature reserve since 1967 has meant that a great deal of its flora and fauna has been well studied. With its diversity of habitats it also means that there is a great deal of it too! Most visitors who come to Holkham will see the familiar and the obvious; birds, deer, hares etc yet there is much more to be seen by the specialist/enthusiastic naturalist. Holkham seems to have this uncanny knack of having certain species that are rare elsewhere yet here are often in abundance. With that in mind a very keen group of mainly entomologists (insect specialists - yet they were keen on all aspects of natural history) called the Pan Species Listers from various parts of the UK descended on the reserve over the weekend of June 18th/19th. Their aim was to find and identify as many species as they could from the Friday evening to the Sunday afternoon. It was great for them to explore such rich coastal habitats and it was good for us to acquire a wealth of information on some often neglected wildlife found on the reserve. Although the weather was far from great (a north westerly wind and rain on the Saturday!) it seems a good time was had by all. Moth traps were set, sweep nets were swept and leaf litter was sifted through to find a fantastic array of insects and other invertebrates. With some of the group coming from as far away as Dorset, Devon, Somerset and the Isle of Wight, a few of the reserve’s specialities were keen to be seen. Luckily for them the increasingly scarce plant Yellow Bird’s nest was just out and in perfect condition. Natterjack Toads seemed to be everywhere the group looked within the dunes, under logs way out of their normal range and even in small burrows close to the beach edge. 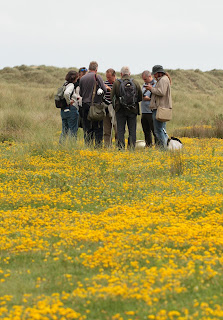 One of the group’s main quarries was a small metallic green ‘malachite’ beetle Clanoptilus barnevillei, a bone fide rarity found only along the North Norfolk coast, with Holkham said to be its stronghold. It was not long before it was found and in plentiful numbers on the ragwort flowers amidst the dunes. Other exciting finds were a Bristly Millipede on the barn wall at Hill Farm, a very large russet coloured long horned beetle called the Dusky Longhorn and a large salt marsh loving spider called the Yellow-striped Bear Spider that is only known from a few other sites around the English coast. As is always the case the identification process for many of the more subtle beetles and bugs can be rather time consuming involving cross referencing literature with microscopically examined specimens so at present we are still awaiting the results and findings from the weekend. Holkham NNR has actually had 818 species of beetle recorded here, a life’s work no less for one local enthusiast, so with that in mind there might be plenty of work involved from one weekend’s findings alone ! 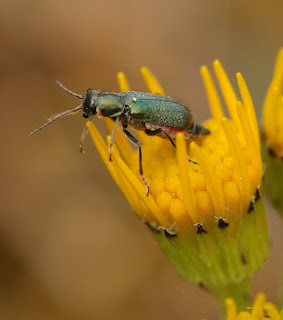 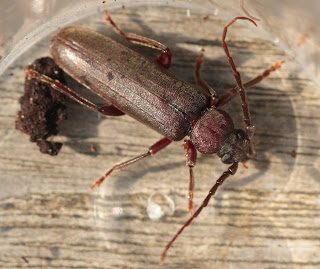 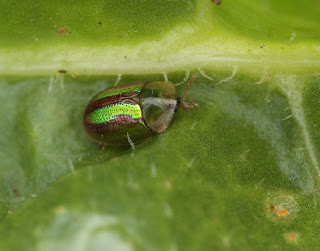